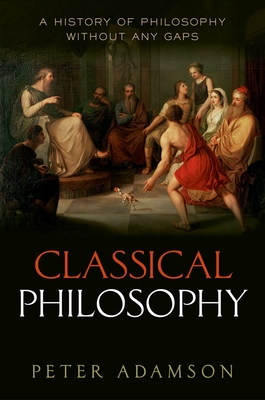 A History of Philosophy Without Any Gaps, Volume 1

Classical Philosophy is the first of a series of books in which Peter Adamson aims ultimately to present a complete history of philosophy, more thoroughly but also more enjoyably than ever before. In short, lively chapters, based on the popular History of Philosophy podcast, he offers an accessible, humorous, and detailed look at the emergence of philosophy with the Presocratics, the probing questions of Socrates, and the first full flowering of philosophy with the dialogues of Plato and the treatises of Aristotle. The story is told "without any gaps," discussing not only such major figures but also less commonly discussed topics like the Hippocratic Corpus, the Platonic Academy, and the role of women in ancient philosophy. Within the thought of Plato and Aristotle, the reader will find in-depth introductions to major works, such as the Republic and the Nicomachean Ethics, which are treated in detail that is unusual in an introduction to ancient philosophy. Adamson looks at fascinating but less frequently read Platonic dialogues like the Charmides and Cratylus, and Aristotle's ideas in zoology and poetics. This full coverage allows him to tackle ancient discussions in all areas of philosophy, including epistemology, metaphysics, philosophy of language, philosophy of science, ethics and politics. Attention is also given to the historical and literary context of classical philosophy, with exploration of how early Greek cosmology responded to the poets Homer and Hesiod, how Socrates was presented by the comic playwright Aristophanes and the historian Xenophon, and how events in Greek history may have influenced Plato's thought. This is a new kind of history which will bring philosophy to life for all readers, including those coming to the subject for the first time.

Peter Adamson took his doctorate from the University of Notre Dame and first worked at King's College London. In 2012 he moved to the Ludwig-Maximilians-Universitat Munchen, where he is Professor of Late Ancient and Arabic Philosophy. He has published widely in ancient and medieval philosophy, especially on Neoplatonism and on philosophy in the Islamic world.
Loading...
or
Not Currently Available for Direct Purchase