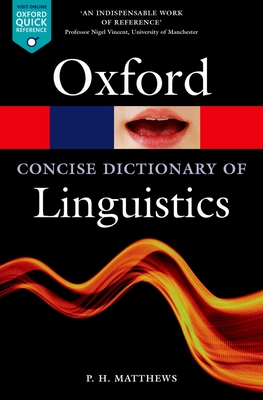 The third edition of The Concise Oxford Dictionary of Linguistics is an authoritative and invaluable reference source covering every aspect of the wide-ranging field of linguistics. In 3,250 entries this dictionary spans grammar, phonetics, semantics, languages (spoken and written), dialects, and sociolinguistics. Clear examples - and diagrams where appropriate - help to convey the meanings of even the most technical terms. It also incorporates entries on key scholars of linguistics, both ancient and modern, summarizing their specialisms and achievements. With existing entries thoroughly revised and updated, and the addition of 100 new entries, this new edition expands its coverage of semantics, as well as recently emerging terminology within, for example, syntactic theory and sociolinguistics.

Peter Matthews is Emeritus Professor of Linguistics at Cambridge University and a Fellow of St. John's College, Cambridge. His many publications include Inflectional Morphology (1972), Morphology (2nd ed. 1991), Generative Grammar and Linguistic Competence (1979), Syntax (1981), Grammatical Theory in the United States from Bloomfield to Chomsky (1993), A Short History of Structural Linguistics (2001), Syntactic Relations: A Critical Survey (2007), Linguistics: A Very Short Introduction (2003), and The Positions of Adjectives in English (2014).
Loading...
or
Not Currently Available for Direct Purchase