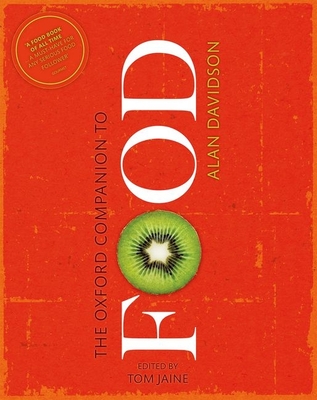 The Oxford Companion to Food

Twenty years in the making, the first edition of this bestselling reference work appeared in 1999 to worldwide acclaim. Combining serious and meticulously researched facts with entertaining and witty commentary, it has been deemed unique by chefs and reviewers around the globe. It contains both a comprehensive catalog of foodstuffs - crackers and cookies named for battles and divas; body parts from toe to cerebellum; breads from Asia to the Mediterranean - and a richly allusive account of the culture of food, whether expressed in literature and cook books, or as dishes special to a country or community. Retaining Alan Davidson's wisdom and wit, this new edition also covers the latest developments across the whole spectrum of this subject. Tom Jaine has taken the opportunity to update the text and alert readers to new perspectives in food studies. There is new coverage on attitudes towards food consumption, production and perception, such as food and genetics, food and sociology, and obesity. New entries include terms such as convenience foods, gastronomy, fusion food, leftovers, obesity, local food, and many more. There are also new entries on important personalities who are of special significance within the world of food, among them Clarence Birdseye, Henri Nestle, and Louis Pasteur. Now in its third edition the Companion maintains its place as the foremost food reference resource for study and home use.

Alan Davidson was a distinguished author and publisher, and one of the world's best-known writers on fish and fish cookery. In 1975 he retired early from the diplomatic service - after serving in, among other places, Washington, Egypt, Tunisia, and Laos, where he was British Ambassador - to pursue a fruitful second career as a food historian and food writer extraordinaire. Among his popular books are North Atlantic Seafood and Mediterrranean Seafood. In 2003, shortly before his death, he was awarded the Erasmus Prize for his contribution to European culture. Tom Jaine is an independent writer and publisher, specializing in food and food history. He is the author of numerous books, including Cooking in the Country, Making Bread at Home, and Traditional Country House Cooking. He frequently writes for The Times, The Guardian, the Sunday Telegraph, the Evening Standard, and many magazines and journals. He was editor of The Good Food Guide from 1989 to 1994, has presented 'The Food Programme' on Radio 4, and has participated in discussions of food on radio and television.
Loading...
or support indie stores by buying on