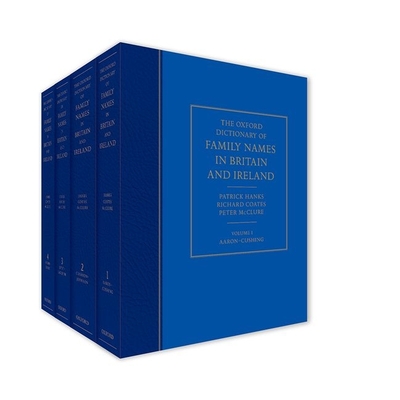 The Oxford Dictionary of Family Names in Britain and Ireland (Hardcover)

Containing entries for more than 45,000 English, Scottish, Welsh, Irish, Cornish, and immigrant surnames, The Oxford Dictionary of Family Names in Britain and Ireland is the ultimate reference work on family names of the UK. The Dictionary includes every surname that currently has more than 100 bearers. Each entry contains lists of variant spellings of the name, an explanation of its origins (including the etymology), lists of early bearers showing evidence for formation and continuity from the date of formation down to the 19th century, geographical distribution, and, where relevant, genealogical and bibliographical notes, making this a fully comprehensive work on family names. This authoritative guide also includes an introductory essay explaining the historical background, formation, and typology of surnames and a guide to surnames research and family history research. Additional material also includes a list of published and unpublished lists of surnames from the Middle Ages to the present day.

Professor Patrick Hanks holds research professorships at the Bristol Centre for Linguistics in the University of the West of England, and at the Research Institute of Information and Language Processing in the University of Wolverhampton. He is an expert lexicographer, corpus linguist, and onomastician. Professor Richard Coates is a Professor in Linguistics at the University of the West of England. He is particularly interested in the area where linguistics, history, and geography meet and specializes in onomastics, historical change in northern and western European languages, and dialectology. He is Hon. Director of the Survey of English Place-Names and Vice-President of the International Council of Onomastic Sciences. Dr Peter McClure is an Honorary Research Fellow and former Senior Lecturer in English Language and Literature at the University of Hull. He has published widely on the origins and historical implications of English given names and surnames, and on the methodology of anthroponymic research and anthroponymic dictionaries. He is President of the Society for Name Studies in Britain and Ireland (2014-17), a Vice-President of the English Place-Name Society, and an onomastic consultant to the Oxford English Dictionary.
or
Not Currently Available for Direct Purchase
Copyright © 2020 American Booksellers Association