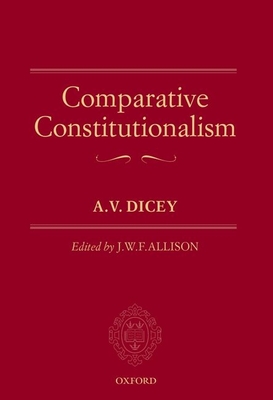 A.V. Dicey, former Vinerian Professor of English Law, University of Oxford (1882-1909) Albert Venn Dicey (1835-1922) was Vinerian Professor of English Law at the University of Oxford and the pre-eminent constitutional lawyer of the nineteenth century. His Introduction to the Study of the Law of the Constitution ran to eight editions in his lifetime and remains one of the canonicaltexts in the history of English constitutional law. John Allison is Senior Lecturer in the Faculty of Law, University of Cambridge, and a Fellow of Queens' College, Cambridge. He previously taught at the Universities of Chicago and London, and is the author of two books, A Continental Distinction in the Common Law: A Historical and ComparativePerspective on English Public Law (OUP 1996) and The English Historical Constitution: Continuity, Change and European Effects (CUP 2007).
Loading...
or
Not Currently Available for Direct Purchase