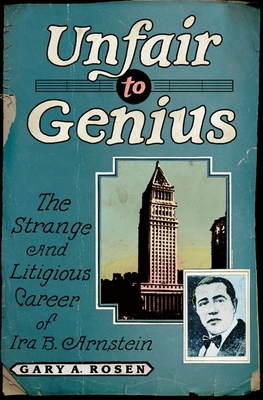 The Strange and Litigious Career of Ira B. Arnstein

The long and tortured career of Ira B. Arnstein, the unrivaled king of copyright infringement plaintiffs, opens a curious window into the evolution of copyright law in the United States. As Gary A. Rosen shows in this frequently funny and always entertaining history, the litigious Arnstein was a trenchant observer and most improbable participant in the transformation of not just copyright, but of American popular music itself. A musical prodigy in the late nineteenth century, Arnstein performed as a boy soprano at the famous 1893 White City exhibition in Chicago. He grew up to be a composer of moderate accomplishment, but by the mid-1920s his fortunes had reversed in the face of changing tastes and times. Embittered and confused, he became convinced that he was the victim of a conspiracy to steal his music and set out on a three-decade-long campaign to prove it, suing most of the major players in the popular music industry of his day. Although Arnstein never won a case, Rosen shows that the decisions rendered ultimately defined some of the basic parameters of copyright law. His most consequential case, against a dumbfounded Cole Porter, established precedents that have provided the foundation for successful suits against George Harrison, Michael Bolton, and many others. Unfair to Genius alternates the stories of Arnstein and a colorful cast of supporting characters with a fascinating account of the economic, technological, and legal forces of the first half of the twentieth century that shifted the balance of power from the mercenary music publishers of Tin Pan Alley to the composers and lyricists who wrote the Great American Songbook.

Gary A. Rosen has practiced intellectual property law for more than 25 years. Before entering private practice, he served as a law clerk to federal appellate judge and award-winning legal historian A. Leon Higginbotham, Jr. He lives outside Philadelphia.
Loading...
or
Not Currently Available for Direct Purchase