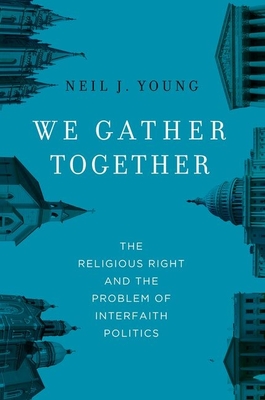 The Religious Right and the Problem of Interfaith Politics

The story of the birth of the Religious Right is a familiar one. In the 1970s, mainly in response to Roe v. Wade, evangelicals and conservative Catholics put aside their longstanding historical prejudices and theological differences and joined forces to form a potent political movement that swept across the country. In this provocative book, Neil J. Young argues that almost none of this is true. Young offers an alternative history of the Religious Right that upends these widely-believed myths. Theology, not politics, defined the Religious Right. The rise of secularism, pluralism, and cultural relativism, Young argues, transformed the relations of America's religious denominations. The interfaith collaborations among liberal Protestants, Catholics, and Jews were met by a conservative Christian counter-force, which came together in a loosely bound, politically-minded coalition known as the Religious Right. This right-wing religious movement was made up of Mormons, conservative Catholics, and evangelicals, all of whom were united--paradoxically--by their contempt for the ecumenical approach they saw the liberal denominations taking. Led by the likes of Jerry Falwell, they deemed themselves the "pro-family" movement, and entered full-throated into political debates about abortion, school prayer, the Equal Rights Amendment, gay rights, and tax exemptions for religious schools. They would go on to form a critical new base for the Republican Party. Examining the religious history of interfaith dialogue among conservative evangelicals, Catholics, and Mormons, Young argues that the formation of the Religious Right was not some brilliant political strategy hatched on the eve of a history-altering election but rather the latest iteration of a religious debate that had gone on for decades. This path breaking book will reshape our understanding of the most important religious and political movement of the last 30 years.

Neil J. Young is a historian and independent scholar in New York City. He previously taught at Princeton University. Young holds a B.A. from Duke University and a Ph.D. in U.S. history from Columbia University. His articles have appeared in American Quarterly, the Journal of Policy History, the New York Times, Slate, Huffington Post, and the Christian Science Monitor.
Loading...
or support indie stores by buying on