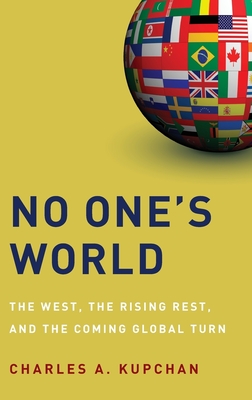 The West, the Rising Rest, and the Coming Global Turn

The world is on the cusp of a global turn. Between 1500 and 1800, the West sprinted ahead of other centers of power in Asia and the Middle East. Europe and the United States have dominated the world since. But today the West's preeminence is slipping away as China, India, Brazil and other emerging powers rise. Although most strategists recognize that the dominance of the West is on the wane, they are confident that its founding ideas--democracy, capitalism, and secular nationalism--will continue to spread, ensuring that the Western order will outlast its primacy.
In No One's World, Charles A. Kupchan boldly challenges this view, arguing that the world is headed for political and ideological diversity; emerging powers will neither defer to the West's lead nor converge toward the Western way. The ascent of the West was the product of social and economic conditions unique to Europe and the United States. As other regions now rise, they are following their own paths to modernity and embracing their own conceptions of domestic and international order.
Kupchan contends that the Western order will not be displaced by a new great power or dominant political model. The twenty-first century will not belong to America, China, Asia, or anyone else. It will be no one's world. For the first time in history, the world will be interdependent--but without a center of gravity or global guardian.
More than simply diagnosing what lies ahead, Kupchan provides a detailed strategy for striking a bargain between the West and the rising rest by fashioning a new consensus on issues of legitimacy, sovereignty, and governance. Thoughtful, provocative, sweeping in scope, this work is nothing less than a global guidebook for the 21st century.

Charles A. Kupchan is Professor of International Affairs at Georgetown University and Whitney Shepardson Senior Fellow at the Council on Foreign Relations. He served on the National Security Council during the Clinton presidency and is the author of How Enemies Become Friends and The End of the American Era. He lives in Washington, DC.
or support indie stores by buying on
Copyright © 2020 American Booksellers Association