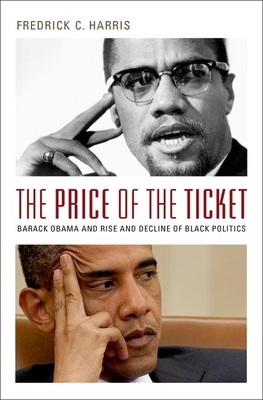 The Price of the Ticket (Hardcover)

Barack Obama and the Rise and Decline of Black Politics

The historical significance of Barack Obama's triumph in the presidential election of 2008 scarcely requires comment. Yet it contains an irony: he won a victory as an African American only by denying that he should discuss issues that target the concerns of African Americans. Obama's very success, writes Fredrick Harris, exacted a heavy cost on black politics.
In The Price of the Ticket, Harris puts Obama's career in the context of decades of black activism, showing how his election undermined the very movement that made it possible. The path to his presidency began just before passage of the 1965 Voting Rights Act, when black leaders began to discuss strategies to make the most of their new access to the ballot. Some argued that black voters should organize into a cohesive, independent bloc to promote both targeted and universal polices; others urged a more race-neutral approach, working together with other racial minorities as well as like-minded whites. This has been the fundamental divide within black politics ever since. At first, the gap did not seem serious. But the post-civil-rights era has accelerated a shift towards race-neutral politics. Obama made a point of distancing himself from older race-conscious black leaders, such as Jesse Jackson- and leaders of the Congressional Black Caucus-even though, as Harris shows, he owes much to Jackson's earlier campaigns for the White House. Unquestionably Obama's approach won support among whites, but Harris finds the results troublesome. The social problems targeted by an earlier generation of black politicians--racial disparities in income and education, stratospheric incarceration and unemployment rates--all persist, yet Obama's election, ironically, marginalized those issues, keeping them off the political agenda. Meanwhile, the civil-rights movement's militancy to attack the vestiges of racial inequality is fading.
Written by one of America's leading scholars of race and politics, The Price of the Ticket will reshape our understanding of the rise of Barack Obama and the decline of a politics dedicated to challenging racial inequality head on.

Fredrick C. Harris is Professor of Political Science and the Director of the Institute for Research in African-American Studies at Columbia University. He is the triple award winner of the book Something Within: Religion in African-American Political Activism and the co-author of Countervailing Forces in African-American Civic Activism, 1973-1994, which received the 2006 W.E.B. DuBois Award from the National Conference of Black Political Scientists and the 2007 Ralph Bunche Award from the American Political Science Association. He has been a visiting scholar at the Woodrow Wilson International Center for Scholars in Washington, D.C. and is a 2012 recipient of the Lenfest Distinguished Faculty Award at Columbia University.
or
Not Currently Available for Direct Purchase
Copyright © 2020 American Booksellers Association