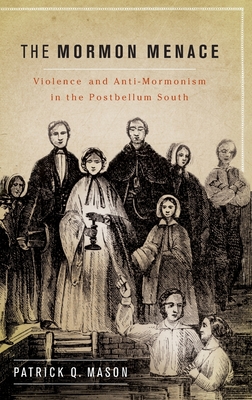 Violence and Anti-Mormonism in the Postbellum South

It incarnates every unclean beast of lust, guile, falsehood, murder, despotism and spiritual wickedness. So wrote a prominent Southern Baptist official in 1899 of Mormonism. Rather than the quintessential American religion, as it has been dubbed by contemporary scholars, in the late nineteenth century Mormonism was America's most vilified homegrown faith. A vast national campaign featuring politicians, church leaders, social reformers, the press, women's organizations, businessmen, and ordinary citizens sought to end the distinctive Latter-day Saint practice of plural marriage, and to extinguish the entire religion if need be. Placing the movement against polygamy in the context of American and southern history, Mason demonstrates that anti-Mormonism was one of the earliest vehicles for reconciliation between North and South after the Civil War and Reconstruction. Southerners joined with northern reformers and Republicans to endorse the use of newly expanded federal power to vanquish the perceived threat to Christian marriage and the American republic. Anti-Mormonism was a significant intellectual, legal, religious, and cultural phenomenon, but in the South it was also violent. While southerners were concerned about distinctive Mormon beliefs and political practices, they were most alarmed at the invasion of Mormon missionaries in their communities and the prospect of their wives and daughters falling prey to polygamy. Moving to defend their homes and their honor against this threat, southerners turned to legislation, to religion, and, most dramatically, to vigilante violence. The Mormon Menace provides new insights into some of the most important discussions of the late nineteenth century and of our own age, including debates over the nature and limits of religious freedom; the contest between the will of the people and the rule of law; and the role of citizens, churches, and the state in regulating and defining marriage.

Patrick Q. Mason is Research Associate Professor at the Joan B. Kroc Institute for International Peace Studies at the University of Notre Dame, and Associate Director for Research of an interdisciplinary research initiative entitled Contending Modernities: Catholic, Muslim, Secular.
Loading...
or support indie stores by buying on