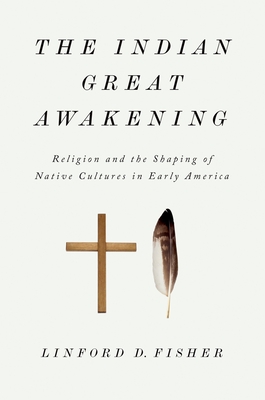 Religion and the Shaping of Native Cultures in Early America

The First Great Awakening was a time of heightened religious activity in the colonial New England. Among those whom the English settlers tried to convert to Christianity were the region's native peoples. In this book, Linford Fisher tells the gripping story of American Indians' attempts to
wrestle with the ongoing realities of colonialism between the 1670s and 1820. In particular, he looks at how some members of previously unevangelized Indian communities in Connecticut, Rhode Island, western Massachusetts, and Long Island adopted Christian practices, often joining local
Congregational churches and receiving baptism. Far from passively sliding into the cultural and physical landscape after King Philip's War, he argues, Native individuals and communities actively tapped into transatlantic structures of power to protect their land rights, welcomed educational
opportunities for their children, and joined local white churches. Religion repeatedly stood at the center of these points of cultural engagement, often in hotly contested ways. Although these Native groups had successfully resisted evangelization in the seventeenth century, by the eighteenth
century they showed an increasing interest in education and religion. Their sporadic participation in the First Great Awakening marked a continuation of prior forms of cultural engagement. More surprisingly, however, in the decades after the Awakening, Native individuals and sub-groups asserted
their religious and cultural autonomy to even greater degrees by leaving English churches and forming their own Indian Separate churches. In the realm of education, too, Natives increasingly took control, preferring local reservation schools and demanding Indian teachers whenever possible. In the
1780s, two small groups of Christian Indians moved to New York and founded new Christian Indian settlements. But the majority of New England Natives-even those who affiliated with Christianity-chose to remain in New England, continuing to assert their own autonomous existence through leasing land,
farming, and working on and off the reservations. While Indian involvement in the Great Awakening has often been seen as total and complete conversion, Fisher's analysis of church records, court documents, and correspondence reveals a more complex reality. Placing the Awakening in context of land loss and the ongoing struggle for cultural autonomy
in the eighteenth century casts it as another step in the ongoing, tentative engagement of native peoples with Christian ideas and institutions in the colonial world. Charting this untold story of the Great Awakening and the resultant rise of an Indian Separatism and its effects on Indian cultures
as a whole, this gracefully written book challenges long-held notions about religion and Native-Anglo-American interaction