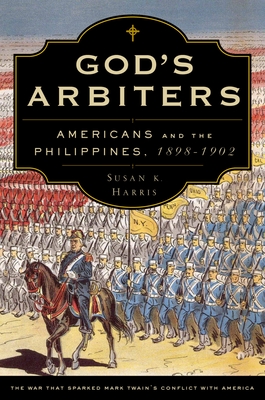 Americans and the Philippines, 1898-1902 (Imagining the Americas)

When the U.S. liberated the Philippines from Spanish rule in 1898, the exploit was hailed at home as a great moral victory, an instance of Uncle Sam freeing an oppressed country from colonial tyranny. The next move, however, was hotly contested: should the U.S. annex the archipelago? The disputants did agree on one point: that the United States was divinely appointed to bring democracy--and with it, white Protestant culture--to the rest of the world. They were, in the words of U.S. Senator Albert Beveridge, "God's arbiters," a civilizing force with a righteous role to play on the world stage. Mining letters, speeches, textbooks, poems, political cartoons and other sources, Susan K. Harris examines the role of religious rhetoric and racial biases in the battle over annexation. She offers a provocative reading both of the debates' religious framework and of the evolution of Christian national identity within the U.S. The book brings to life the personalities who dominated the discussion, figures like the bellicose Beveridge and the segregationist Senator Benjamin Tillman. It also features voices from outside U.S. geopolitical boundaries that responded to the Americans' venture into global imperialism: among them England's "imperial" poet Rudyard Kipling, Nicaragua's poet/diplomat Rub�n Dar�o, and the Philippines' revolutionary leaders Emilio Aguinaldo and Apolinario Mabini. At the center of this dramatis personae stands Mark Twain, an influential partisan who was, for many, the embodiment of America. Twain had supported the initial intervention but quickly changed his mind, arguing that the U.S. decision to annex the archipelago was a betrayal of the very principles the U.S. claimed to promote. Written with verve and animated by a wide range of archival research, God's Arbiters reveals the roots of current debates over textbook content, evangelical politics, and American exceptionalism-shining light on our own times as it recreates the culture surrounding America's global mission at the turn into the twentieth century.

Susan K. Harris is the Joyce and Elizabeth Hall Distinguished Professor of American Literature and Culture at the University of Kansas. She is the author of several works on nineteenth-century literature including 19th-Century American Women's Novels and The Courtship of Olivia Langdon and Mark Twain.
Loading...
or support indie stores by buying on