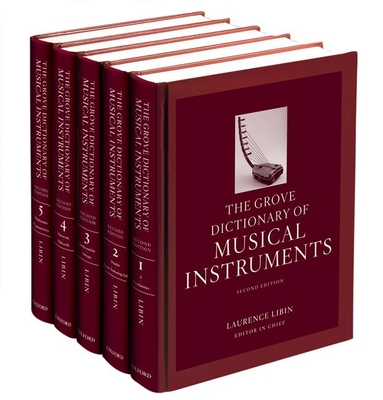 The Grove Dictionary of Musical Instruments

The Grove Dictionary of Musical Instruments, 2nd edition, is the largest, most comprehensive reference publication on musical instruments of the world yet produced. Thirty years ago, the three-volume first edition of the dictionary was met with wide acclaim and went on to become an essential library research tool. This second edition reflects the growth of the scope and methodologies of the field of organology in the last three decades. At five volumes, the second edition provides greatly expanded coverage of instruments from around the world and their builders, with special attention to electronic and experimental instruments; the human body as instrument; the history and techniques of instrument design and manufacture; performance practice; and scholars whose work has shaped our understanding of musical instruments. The dictionary compiles essential information about the most important instruments worldwide, as well as a representative selection of lesser-known instruments of particular significance. Its core content, articles on instruments and their makers, is expanded and supported with articles addressing the cultural role of instruments throughout history and across the globe, with special attention to the development of organology in the thirty years since the first edition. Through the systematic study of the history of musical instruments and their design, technologies, and functions, the dictionary seeks to map the directions in which this field is growing in the 21st century, and to encourage further research. The dictionary's articles are supplemented by over 600 images and 190 musical examples, an index, abbreviations lists, and list of contributors. With well-researched, informative articles by over 1000 authors, including most of the top scholars in the field, The Grove Dictionary of Musical Instruments is an essential tool not just for students and scholars of organology, musicology, ethnomusicology and anthropology,

Laurence Libin, editor-in-chief of The Grove Dictionary of Musical Instruments (Oxford University Press), is honorary curator of Steinway & Sons, and emeritus curator of musical instruments at The Metropolitan Museum of Art (1973-2006), where he was first incumbent of the endowed Frederick P. Rose chair. Educated as a harpsichordist and musicologist at Northwestern University, the University of Chicago, and King's College, University of London, Mr. Libin has taught in the graduate schools of Columbia University and New York University, including the NYU Institute of Fine Arts, and lectures internationally. His work has been supported by grants from the National Endowment for the Arts, the National Endowment for the Humanities, the National Museum Act (Smithsonian Institution), the International Research and Exchanges (IREX) program of the U.S. Department of State, the National Antique and Art Dealers League, the Catherine Lorillard Wolfe Fund, CEC International Partners, the Likhachev Foundation, and other sources.

In addition to numerous exhibitions, Laurence Libin has produced two nationally syndicated radio series as well as many recordings from the Metropolitan Museum's collection, and has published more than 150 articles, reviews, catalogues, and monographs. He was co-editor of the 2008 and 2009 Organ Yearbooks. He is a frequent consultant to private collectors, museums, and cultural institutions worldwide, and a leading spokesman for historical preservation. In 2006 the Galpin Society (UK) awarded him the Anthony Baines Memorial Prize for services to organology, and in 2009 he received the Curt Sachs Award for lifetime achievement from the American Musical Instrument Society.

Mr. Libin is a Life Fellow of the Royal Society of Arts. He has been president of the Organ Historical Society, vice-president of the American Musical Instrument Society, and has served on the National Council of the American Musicological Society and on its Noah Greenberg and Howard Mayer Brown Award Committees, as a member of the Comite International des Musees et Collections d'Instruments de Musique, and on governing boards of the American Organ Archives and OHS Press. He has been a member of the editorial board of the American Recorder Society and of advisory councils of Red Cedar Chamber Music (Cedar Rapids, Iowa), the Medici Archive Project (Florence, Italy), the MusicaRussia Foundation, Early Music America, the New York Flute Club, the Boston Early Music Festival, the Boston Baroque and Classical Band orchestras, the Instituto de Organos Historicos de Oaxaca (Mexico), and grant review panels of the National Endowment for the Humanities.

"
or
Not Currently Available for Direct Purchase