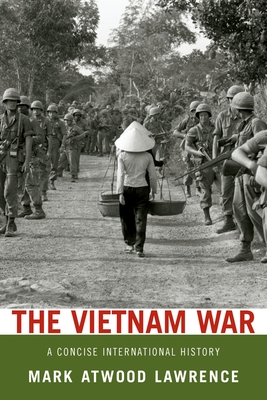 The Vietnam War remains a topic of extraordinary interest, not least because of striking parallels between that conflict and more recent fighting in the Middle East. In The Vietnam War, Mark Atwood Lawrence draws upon the latest research in archives around the world to offer readers a superb account of a key moment in U.S. as well as global history. While focusing on American involvement between 1965 and 1975, Lawrence offers an unprecedentedly complete picture of all sides of the war, notably by examining the motives that drove the Vietnamese communists and their foreign allies. Moreover, the book carefully considers both the long- and short-term origins of the war. Lawrence examines the rise of Vietnamese communism in the early twentieth century and reveals how Cold War anxieties of the 1940s and 1950s set the United States on the road to intervention. Of course, the heart of the book covers the "American war," ranging from the overthrow of South Vietnamese President Ngo Dinh Diem to the impact of the Tet Offensive on American public opinion, Lyndon Johnson's withdrawal from the 1968 presidential race, Richard Nixon's expansion of the war into Cambodia and Laos, and the problematic peace agreement of 1973, which ended American military involvement. Finally, the book explores the complex aftermath of the war--its enduring legacy in American books, film, and political debate, as well as Vietnam's struggles with severe social and economic problems. A compact and authoritative primer on an intensely relevant topic, this well-researched and engaging volume offers an invaluable overview of the Vietnam War.

Mark Atwood Lawrence is Associate Professor of History at the University of Texas at Austin. He is the author of Assuming the Burden: Europe and the American Commitment to War in Vietnam, which won the 2006 George Louis Beer Prize and Paul Birdsall Prize of the American Historical Association. He is also the co-editor of The First Vietnam War: Colonial Conflict and Cold War Crisis, and the editor of The New York Times Twentieth Century in Review: The Vietnam War.
Loading...
or support indie stores by buying on