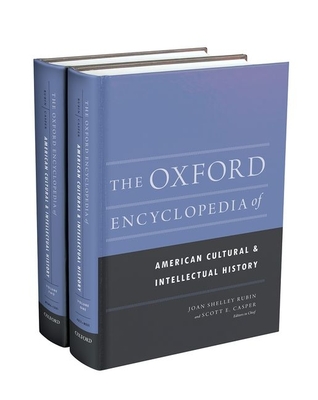 The Oxford Encyclopedia of American Cultural and Intellectual History (Hardcover)

The Oxford Encyclopedia of American Cultural and Intellectual History brings together in one two-volume set the record of the nation's values, aspirations, anxieties, and beliefs as expressed in both everyday life and formal bodies of thought. Over the past twenty years, the field of cultural history has moved to the center of American historical studies, and has come to encompass the experiences of ordinary citizens in such arenas as reading and religious practice as well as the accomplishments of prominent artists and writers. Some of the most imaginative scholarship in recent years has emerged from this burgeoning field. The scope of the volume reflects that development: the encyclopedia incorporates popular entertainment ranging from minstrel shows to video games, middlebrow ventures like Chautauqua lectures and book clubs, and preoccupations such as "Perfectionism" and "Wellness" that have shaped Americans' behavior at various points in their past and that continue to influence attitudes in the present. The volumes also make available recent scholarly insights into the writings of political scientists, philosophers, feminist theorists, social reformers, and other thinkers whose works have furnished the underpinnings of Americans' civic activities and personal concerns. Anyone wishing to understand the hearts and minds of the inhabitants of the United States from the early days of settlement to the twenty-first century will find the encyclopedia invaluable.

Scott E. Casper is a Dean and Professor of History of the University of Nevada, Reno, where he teaches 19th-century United States History and American cultural history. His publications include Sarah Johnson's Mount Vernon: The Forgotten History of an American Shrine (Hill & Wang, 2008) and Constructing American Lives: Biography and Culture in Nineteenth Century America (UNC Press, 1999).
or
Not Currently Available for Direct Purchase
Copyright © 2020 American Booksellers Association