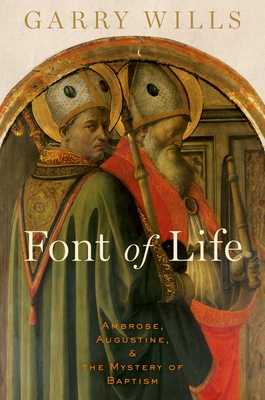 Ambrose, Augustine, and the Mystery of Baptism (Emblems of Antiquity)

No two men were more influential in the early Church than Ambrose, the powerful Bishop of Milan, and Augustine, the philosopher from provincial Africa who would write The Confessions and The City of God. Different in background, they were also extraordinarily different in personality. In Font of Life, Garry Wills explores the remarkable moment when their lives intersected at one of the most important, yet rarely visited, sites in the Christian world. Hidden under the piazza of the Duomo in Milan lies part of the foundations of a fourth-century cathedral where, at dawn on Easter of 387, Augustine and a group of people seeking baptism gathered after an all-night vigil. Ambrose himself performed the sacrament and the catechumens were greeted by their fellows in the faith, which included Augustine's mother Monnica. Though the occasion had deep significance for the participants, this little cluster of devotees was unaware that they were creating the future of the Western church. Ambrose would go on to forge new liturgies, new forms of church music, and new chains of churches; Augustine would return to Africa to become Bishop of Hippo and one of the most influential writers of Christianity. Garry Wills uses the ancient baptistry to chronicle a pivotal chapter in the history of the Church, highlighting the often uncomfortable relationship between the two church fathers and exploring the mystery and meanings of the sacrament of baptism. In addition, he brings long overdue attention to an unjustly neglected landmark of early Christianity.

Garry Wills is the author of many books, including Bomb Power, What Jesus Meant, Why I Am a Catholic, Papal Sin, and Lincoln at Gettysburg, winner of the Pulitzer Prize.
or
Buy Here
Copyright © 2020 American Booksellers Association