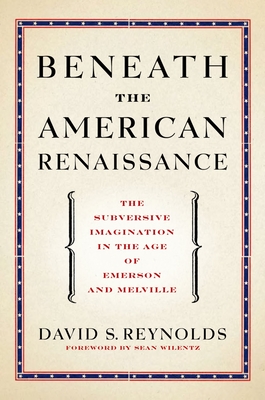 Beneath the American Renaissance

The Subversive Imagination in the Age of Emerson and Melville

The award-winning Beneath the American Renaissance is a classic work on American literature. It immeasurably broadens our knowledge of our most important literary period, as first identified by F.O. Matthiessen's American Renaissance. With its combination of sharp critical insight, engaging observation, and narrative drive, it represents the kind of masterful cultural history for which David Reynolds is known. Here the major works of Emerson, Thoreau, Whitman, Poe, Hawthorne, Melville, and Dickinson receive striking, original readings set against the rich backdrop of contemporary popular writing. Now back in print, the volume includes a new foreword by historian Sean Wilentz that reveals the book's impact and influence. A magisterial work of criticism and cultural history, Beneath the American Renaissance will fascinate anyone interested in the genesis of America's most significant literary epoch and the iconic figures who defined it.

David S. Reynolds is Distinguished Professor of English and American Studies at the Graduate Center of the City University of New York. His books include Walt Whitman's America, Waking Giant: America in the Age of Jackson, John Brown, Abolitionist, and Mightier than the Sword: Uncle Tom's Cabin and the Battle for America.
Loading...
or
Not Currently Available for Direct Purchase