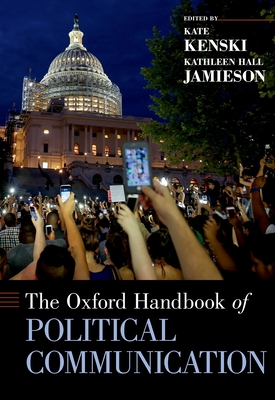 The scholarly field of political communication emerged in the first half of the twentieth century, amidst the turmoil of two world wars and the emergence of film, radio, and-eventually-television. As a subject of inquiry, political communication is interdisciplinary by its very nature, bridging rhetoric, public opinion, political behavior, political psychology, journalism, media studies, and telecommunications. In The Oxford Handbook of Political Communication, Kate Kenski and Kathleen Hall Jamieson bring together a diverse cast of leading scholars in the field, including some of its founders. Both definitive and foundational, the book covers a vast range of topics, including political advertising, agenda setting, framing, social media, and the functions of the press in a democratic system. The essays in this volume demonstrate that political communication is a hybrid field with complex ancestry, permeable boundaries, and interests that overlap with the related fields of political sociology, public opinion, rhetoric, neuroscience, and media psychology. A major addition to Oxford's handbook series, this is an indispensable reference for scholars and students interested in the study of how, why, when, and with what effect humans make sense of symbolic exchanges about sharing and shared power. The sixty-two chapters in The Oxford Handbook of Political Communication not only offer an overview of past scholarship; they also reflect on its relevance in a changing media landscape and set the agenda for future research in virtually every aspect of the discipline.

Kate Kenski is Associate Professor of Communication and Government & Public Policy at the University of Arizona. The book she co-authored with Bruce Hardy and Kathleen Hall Jamieson, The Obama Victory How Media, Money, and Message Shaped the 2008 Election, has won several awards, including the 2011 ICA Outstanding Book Award the 2012 NCA Diamond Anniversary Book Award, and the Association of American Publishers' PROSE Award in Government and Politics. Kathleen Hall Jamieson is the Elizabeth Ware Packard Professor of Communication at the Annenberg School for Communication of the University of Pennsylvania and Director of its Annenberg Public Policy Center. Jamieson is the co-editor of the Oxford Handbook on the Science of Science Communication (with Dietram Scheufele and Dan Kahan 2017). Among her award winning Oxford University Press books are Packaging the Presidency, Eloquence in an Electronic Age, Spiral of Cynicism (with Joseph Cappella), and The Obama Victory (with Kenski and Hardy).
or
Not Currently Available for Direct Purchase
Copyright © 2020 American Booksellers Association