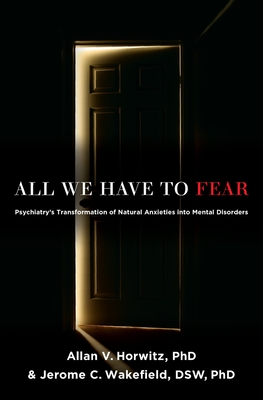 All We Have to Fear (Hardcover)

Thirty years ago, it was estimated that less than five percent of the population had an anxiety disorder. Today, some estimates are over fifty percent, a tenfold increase. Is this dramatic rise evidence of a real medical epidemic? In All We Have to Fear, Allan Horwitz and Jerome Wakefield argue that psychiatry itself has largely generated this "epidemic" by inflating many natural fears into psychiatric disorders, leading to the over-diagnosis of anxiety disorders and the over-prescription of anxiety-reducing drugs. American psychiatry currently identifies disordered anxiety as irrational anxiety disproportionate to a real threat. Horwitz and Wakefield argue, to the contrary, that it can be a perfectly normal part of our nature to fear things that are not at all dangerous--from heights to negative judgments by others to scenes that remind us of past threats (as in some forms of PTSD). Indeed, this book argues strongly against the tendency to call any distressing condition a "mental disorder." To counter this trend, the authors provide an innovative and nuanced way to distinguish between anxiety conditions that are psychiatric disorders and likely require medical treatment and those that are not--the latter including anxieties that seem irrational but are the natural products of evolution. The authors show that many commonly diagnosed "irrational" fears--such as a fear of snakes, strangers, or social evaluation--have evolved over time in response to situations that posed serious risks to humans in the past, but are no longer dangerous today. Drawing on a wide range of disciplines including psychiatry, evolutionary psychology, sociology, anthropology, and history, the book illuminates the nature of anxiety in America, making a major contribution to our understanding of mental health.

Allan V. Horwitz is Board of Governors Professor of Sociology at Rutgers University. His books include The Social Control of Mental Illness and Creating Mental Illness. He is the recipient of the Pearlin Award for lifetime Achievement in the Sociology of Mental Health from the American Sociological Association.Jerome C. Wakefield is University Professor, Professor of Social Work, and Professor of Psychiatry at New York University. He is the author, with Allan V. Horwitz, of The Loss of Sadness: How Psychiatry Transformed Normal Sorrow into Depressive Disorder--named Best Psychology Book of 2007 by the Association of American Publishers.
or
Not Currently Available for Direct Purchase
Copyright © 2020 American Booksellers Association