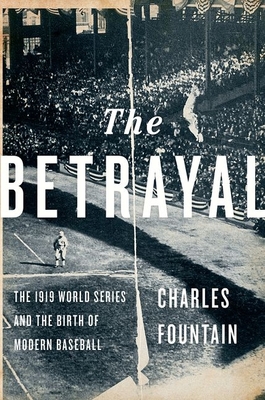 The 1919 World Series and the Birth of Modern Baseball

In the most famous scandal of sports history, eight Chicago White Sox players--including Shoeless Joe Jackson--agreed to throw the 1919 World Series to the Cincinnati Reds in exchange for the promise of $20,000 each from gamblers reportedly working for New York mobster Arnold Rothstein. Heavily favored, Chicago lost the Series five games to three. Although rumors of a fix flew while the series was being played, they were largely disregarded by players and the public at large. It wasn't until a year later that a general investigation into baseball gambling reopened the case, and a nationwide scandal emerged.

In this book, Charles Fountain offers a full and engaging history of one of baseball's true moments of crisis and hand-wringing, and shows how the scandal changed the way American baseball was both managed and perceived. After an extensive investigation and a trial that became a national morality play, the jury returned not-guilty verdicts for all of the White Sox players in August of 1921. The following day, Judge Kennesaw Mountain Landis, baseball's new commissioner, "regardless of the verdicts of juries," banned the eight players for life. And thus the Black Sox entered into American mythology. Guilty or innocent? Guilty and innocent? The country wasn't sure in 1921, and as Fountain shows, we still aren't sure today. But we are continually pulled to the story, because so much of modern sport, and our attitude towards it, springs from the scandal.

Fountain traces the Black Sox story from its roots in the gambling culture that pervaded the game in the years surrounding World War I, through the confusing events of the 1919 World Series itself, to the noisy aftermath and trial, and illuminates the moment as baseball's tipping point. Despite the clumsy unfolding of the scandal and trial and the callous treatment of the players involved, the Black Sox saga was a cleansing moment for the sport. It launched the age of the baseball commissioner, as baseball owners hired Landis and surrendered to him the control of their game. Fountain shows how sweeping changes in 1920s triggered by the scandal moved baseball away from its association with gamblers and fixers, and details how American's attitude toward the pastime shifted as they entered into "The Golden Age of Sport."

Situating the Black Sox events in the context of later scandals, including those involving Reds manager and player Pete Rose, and the ongoing use of steroids in the game up through the present, Fountain illuminates America's near century-long fascination with the story, and its continuing relevance today.

Charles Fountain teaches at Northeastern University's School of Journalism. He is the author of several books, including Under the March Sun: The Story of Spring Training.
or support indie stores by buying on
Copyright © 2020 American Booksellers Association