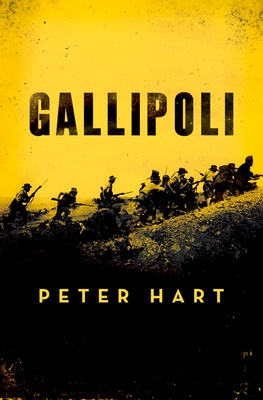 One of the most famous battles in history, the WWI Gallipoli campaign began as a bold move by the British to capture Constantinople, but this definitive new history explains that from the initial landings--which ended with so much blood in the sea it could be seen from airplanes overhead--to the desperate attacks of early summer and the battle of attrition that followed, it was a tragic folly destined to fail from the start. Gallipoli forced the young Winston Churchill from office, established Turkey's iconic founder Mustafa Kemal (better known as "Ataturk"), and marked Australia's emergence as a nation in its own right. Drawing on unpublished eyewitness accounts by individuals from all ranks--not only from Britain, Australia and New Zealand, but from Turkey and France as well--Peter Hart weaves first-hand stories into a vivid narrative of the battle and its aftermath. Hart, a historian with the Imperial War Museum and a battlefield tour guide at Gallipoli, provides a vivid, boots-on-the-ground account that brilliantly evokes the confusion of war, the horrors of combat, and the grim courage of the soldiers. He provides an astute, unflinching assessment of the leaders as well. He shows that the British invasion was doomed from the start, but he places particular blame on General Sir Ian Hamilton, whose misplaced optimism, over-complicated plans, and unwillingness to recognize the gravity of the situation essentially turned likely failure into complete disaster. Capturing the sheer drama and bravery of the ferocious fighting, the chivalry demonstrated by individuals on both sides amid merciless wholesale slaughter, and the futility of the cause for which ordinary men fought with extraordinary courage and endurance--Gallipoli is a riveting account of a battle that continues to fascinate us close to a hundred years after the event.

Peter Hart is Oral Historian of the Imperial War Museum and works as battlefield tour guide at Gallipoli. He is author of The Somme: The Darkest Hour on the Western Front and 1918: A Very British Victory
Loading...
or support indie stores by buying on