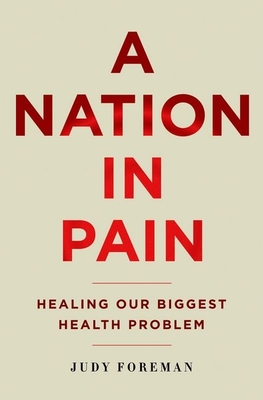 Out of 238 million American adults, 100 million live in chronic pain. And yet the press has paid more attention to the abuses of pain medications than the astoundingly widespread condition they are intended to treat. Ethically, the failure to manage pain better is tantamount to torture. When
chronic pain is inadequately treated, it undermines the body and mind. Indeed, the risk of suicide for people in chronic pain is twice that of other people. Far more than just a symptom, writes author Judy Foreman, chronic pain can be a disease in its own right -- the biggest health problem facing
America today. Published in partnership with the International Association for the Study of Pain, A Nation in Pain offers a sweeping, deeply researched account of the chronic pain crisis, from neurobiology to public policy, and presents to practical solutions that are within our grasp today. Drawing on both her
personal experience with chronic pain and her background as an award-winning health journalist, she guides us through recent scientific discoveries, including genetic susceptibility to pain; gender disparities in pain conditions and treatments, perhaps linked to estrogen; the problem of undertreated
pain in children; the emerging role of the immune system in pain; advances in traditional treatments such as surgery and drugs; and fair-minded assessments of the effectiveness of alternative remedies, including marijuana, acupuncture, massage, and chiropractic care. For many people, the real magic
bullet, Foreman writes, is exercise. Though many patients fear it will increase their discomfort, studies show it consistently produces improvement, often dramatic. She also explores the destructive opioid wars, which have led to a misguided demonization of prescription painkillers. Foreman presents a far-reaching but sensible plan of action, ranging from enhancing pain education in medical schools to reforms of federal policies across the board. For doctors, scientists, policy makers, and especially patients, A Nation in Pain is essential reading.

Judy Foreman is a nationally syndicated health columnist who has won more than 50 journalism awards and whose columns have appeared regularly in the Boston Globe, Los Angeles Times, Dallas Morning News and other national and international outlets. She graduated Phi Beta Kappa from Wellesley College, served in the Peace Corps in Brazil for three years, and received a Master's degree from the Harvard Graduate School of Education. From 2000 to 2001, she was a Fellow in Medical Ethics at Harvard Medical School. From 2001 to 2004, she was a Lecturer on Medicine at Harvard Medical School. She hasalso been the host of a weekly, call-in radio show on Healthtalk.com. In 2014 she was the recipient of the American Pain Society's Kathleen M. Foley Journalist Award.
Loading...
or support indie stores by buying on