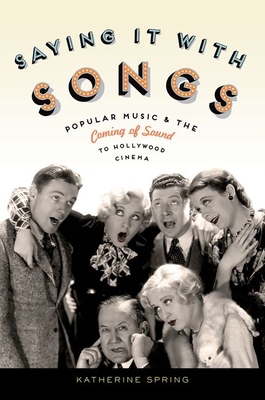 Saying It with Songs

Hollywood's conversion from silent to synchronized sound film production not only instigated the convergence of the film and music industries but also gave rise to an extraordinary period of songs in American cinema. Saying It With Songs considers how the increasing interdependence of Hollywood studios and Tin Pan Alley music publishing firms influenced the commercial and narrative functions of popular songs. While most scholarship on film music of the period focuses on adaptations of Broadway musicals, this book examines the functions of songs in a variety of non-musical genres, including melodramas, romantic comedies, Westerns, prison dramas, and action-adventure films, and shows how filmmakers tested and refined their approach to songs in order to reconcile the spectacle of song performance, the classical norms of storytelling, and the conventions of background orchestral scoring from the period of silent cinema. Written for film and music scholars alike as well as for general readers, Saying It With Songs illuminates the origins of the popular song score aesthetic of American cinema.

Katherine Spring is Associate Professor in the Department of English and Film Studies at Wilfrid Laurier University.
Loading...
or
Not Currently Available for Direct Purchase