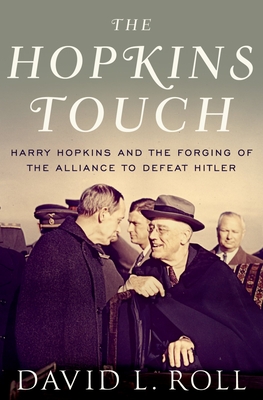 Harry Hopkins and the Forging of the Alliance to Defeat Hitler

The Hopkins Touch offers the first portrait in over two decades of the most powerful man in Roosevelt's administration. In this impressive biography, David Roll shows how Harry Hopkins, an Iowa-born social worker who had been an integral part of the New Deal's implementation, became the linchpin in FDR's--and America's--relationships with Churchill and Stalin, and spoke with an authority second only to the president's. Hopkins could take the political risks his boss could not, and proved crucial to maintaining personal relations among the Big Three. Beloved by some--such as Churchill, who believed that Hopkins "always went to the root of the matter"--and trusted by most--including the paranoid Stalin--there were nevertheless those who resented the influence of "the White House Rasputin." Based on newly available sources, The Hopkins Touch is an absorbing, substantial work that offers a fresh perspective on the World War II era and the Allied leaders, through the life of the man who kept them on point until the war was won.

David Roll is a partner at Steptoe & Johnson LLP and founder of Lex Mundi Pro Bono Foundation, a public interest organization that provides pro bono legal services to social entrepreneurs around the world. He was awarded the Purpose Prize Fellowship by Civic Ventures in 2009. He lives with his wife Nancy and their dog Thatcher in Washington, DC and Glen Arbor, Michigan.
or
Buy Here
Copyright © 2020 American Booksellers Association