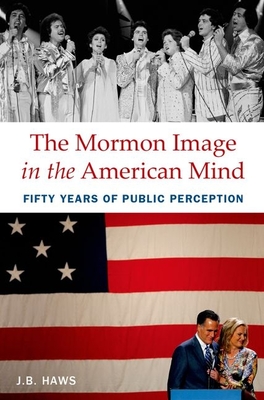 The Mormon Image in the American Mind (Hardcover)

Winner of the Mormon History Association Best Book Award What do Americans really think about Mormons, and why? Through a fascinating survey of Mormon encounters with the media, including such personalities and events as the Osmonds, the Olympics, the Tabernacle Choir, evangelical Christians, the Equal Rights Amendment, Sports Illustrated, and even Miss America, J.B. Haws reveals the dramatic transformation of the American public's understanding of Mormons in the past half-century. When the Mormon George Romney, former governor of Michigan, ran for president in 1968, he was admired for his personal piety and characterized as "a kind of political Billy Graham." When George's son Mitt ran in 2008, a widely distributed email told hundreds of thousands of Christians that a vote for Mitt Romney was a vote for Satan. What had changed in the intervening four decades? Why were the theology of the Latter-day Saints and their "Christian" status mostly nonissues in 1968 but so hotly contested in 2008? For years, the American perception of Mormonism has been torn between admiration for individual Mormons-seen as friendly, hard-working, and family-oriented-and ambivalence toward institutional Mormonism-allegedly secretive, authoritarian, and weird. The Mormon Image in the American Mind offers vital insight into the complex shifts in public perception of The Church of Jesus Christ of Latter-day Saints, its members, and its place in American society.

J.B. Haws is Assistant Professor of church history at Brigham Young University. He is a Hooper, Utah native. He and his wife, Laura, and their four children now live in Provo, Utah.
or
Buy Here
Copyright © 2020 American Booksellers Association