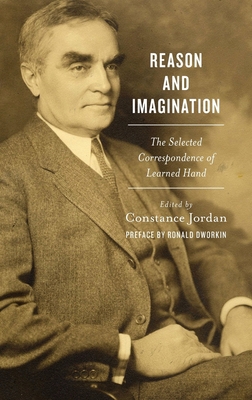 The Selected Correspondence of Learned Hand: 1897-1961

Judge Learned Hand is an icon of American Law. Though he was never nominated to our country's highest court, Hand is nevertheless more frequently quoted by legal scholars and in Supreme Court decisions than any other lower court judge in our history. He was the model for all judges who followed him, setting the standard for the bench with a matchless combination of legal brilliance and vast cultural sophistication. Hand was also renowned as a superb writer. Now, in Reason and Imagination, Constance Jordan offers a unique sampling of the correspondence between Hand and a stellar array of intellectual and legal giants, including Justice Oliver Wendell Holmes, Theodore Roosevelt, Walter Lippmann, Felix Frankfurter, Bernard Berenson, and many other prominent political and philosophical thinkers. The letters--many of which have never been published before--cover almost half a century, often taking the form of brief essays on current events, usually seen through the prism of their historical moment. They reflect Hand's engagement with the issues of the day, ranging from the aftermath of World War I and the League of Nations, the effects of the Depression in the United States, the rise of fascism and the outbreak World War II, McCarthyism, and the Supreme Court's decisions on segregation, among many other topics. Equally important, the letters showcase decades of penetrating and original thought on the major themes of American jurisprudence, particularly key interpretations of the First, Fifth, and Fourteenth Amendments, and will thus be invaluable to those interested in legal issues. Most of these letters have never before been published, making this collection a priceless window into the mind and life of one of the giants of American law.

Constance Jordan is Professor of English and Comparative Literature Emerita at Claremont Graduate University. Jordan has published many books and articles on the subject of literature and the law. She is also Learned Hand's granddaughter.
or support indie stores by buying on