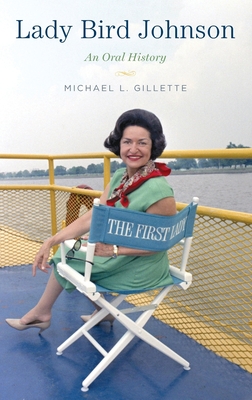 Over a span of eighteen years, Lady Bird Johnson recorded forty-seven oral history interviews with Michael Gillette and his colleagues. These conversations, just released in 2011, form the heart of Lady Bird Johnson: An Oral History, an intimate story of a shy young country girl's transformation into one of America's most effective and admired First Ladies. Lady Bird Johnson's odyssey is one of personal and intellectual growth, political and financial ambition, and a shared life with Lyndon Baines Johnson, one of the most complicated, volatile, and powerful presidents of the 20th century. The former First Lady recounts how a cautious, conservative young woman succumbed to an ultimatum to marry a man she had known for less than three months, how she ran his congressional office during World War II, and how she transformed a struggling Austin radio station into the foundation of a communications empire. As a keen observer of the Washington scene during the eventful decades from the 1930s through the 1960s, Lady Bird Johnson shares dramatic accounts of pivotal moments in American history. We attend informal dinners at Sam Rayburn's apartment and opulent social events at grand mansions from an earlier age. Her rich verbal portraits bring to life scores of personalities, including First Ladies Edith Bolling Wilson, Eleanor Roosevelt, Bess Truman, Mamie Eisenhower, Jacqueline Kennedy, and Pat Nixon. An informal, candid narrative by one of America's most admired First Ladies, this volume reveals how instrumental Lady Bird Johnson's support and guidance were at each stage of her husband's political ascent and how she herself emerged as a significant political force.

Michael L. Gillette directed the LBJ Library's Oral History Program from 1976 to 1991. He later served as director of the Center for Legislative Archives at the National Archives and is currently the executive director of Humanities Texas in Austin. He is the author of Launching the War on Poverty: An Oral History.
or
Not Currently Available for Direct Purchase
Copyright © 2020 American Booksellers Association