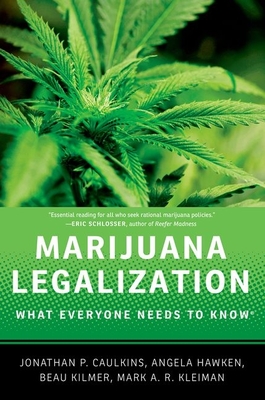 Should marijuana be legalized? The latest Gallup poll reports that exactly half of Americans say "yes"; opinion couldn't be more evenly divided. Marijuana is forbidden by international treaties and by national and local laws across the globe. But those laws are under challenge in several countries. In the U.S., there is no short-term prospect for changes in federal law, but sixteen states allow medical use and recent initiatives to legalize production and non-medical use garnered more than 40% support in four states. California's Proposition 19 nearly passed in 2010, and multiple states are expected to consider similar measures in the years to come. The debate and media coverage surrounding Proposition 19 reflected profound confusion, both about the current state of the world and about the likely effects of changes in the law. In addition, not all supporters of "legalization" agree on what it is they want to legalize: Just using marijuana? Growing it? Selling it? Advertising it? If sales are to be legal, what regulations and taxes should apply? Different forms of legalization might have very different results. Marijuana Legalization: What Everyone Needs to Know� will provide readers with a non-partisan primer about the topic, covering everything from the risks and benefits of using marijuana, to describing the current laws around the drug in the U.S. and abroad. The authors discuss the likely costs and benefits of legalization at the state and national levels and walk readers through the "middle ground" of policy options between prohibition and commercialized production. The authors also consider how marijuana legalization could personally impact parents, heavy users, medical users, drug traffickers, and employers. What Everyone Needs to Know� is a registered trademark of Oxford University Press.

Jonathan P. Caulkins is Stever Professor of Operations Research and Public Policy at Carnegie Mellon University. Angela Hawken is Associate Professor of Public Policy at Pepperdine University. Beau Kilmer is Co-Director of the RAND Drug Policy Research Center. Mark Kleiman is Professor of Public Policy at UCLA and editor of The Journal of Drug Policy Analysis. He is Washington state's lead adviser on the legalization of marijuana, and was named by Politico Magazine as one of the Politico 50, a list of the key thinkers, doers and visionaries reshaping American politics. He is the author of When Brute Force Fails and Against Excess.
or
Not Currently Available for Direct Purchase
Copyright © 2020 American Booksellers Association