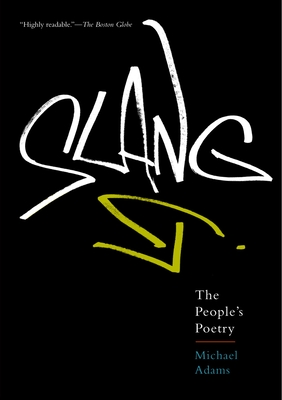 Slang, writes Michael Adams, is poetry on the down low, and sometimes lowdown poetry on the down low, but rarely, if ever, merely lowdown. It is the poetry of everyday speech, the people's poetry, and it deserves attention as language playing on the cusp of art. In Slang: The People's Poetry, Adams covers this perennially interesting subject in a serious but highly engaging way, illuminating the fundamental question What is Slang and defending slang--and all forms of nonstandard English--as integral parts of the American language. Why is an expression like bed head lost in a lexical limbo, found neither in slang nor standard dictionaries? Why are snow-boarding terms such as fakie, goofy foot, ollie and nollie not considered slang? As he addresses these and other lexical curiosities, Adams reveals that slang is used in part to define groups, distinguishing those who are down with it from those who are out of it. Slang is also a rebellion against the mainstream. It often irritates those who color within the lines--indeed, slang is meant to irritate, sometimes even to shock. But slang is also inventive language, both fun to make and fun to use. Rather than complain about slang as bad language, Adams urges us to celebrate slang's playful resistance to the commonplace and to see it as the expression of an innate human capacity, not only for language, but for poetry.

Michael Adams teaches English language and literature at Indiana University. He is the author of Slayer Slang: A Buffy the Vampire Slayer Lexicon and editor of From Elvish to Klingon. For several years, he was editor of Dictionaries: Journal of the Dictionary Society of North America. He is currently editor of the journal American Speech.
Loading...
or support indie stores by buying on