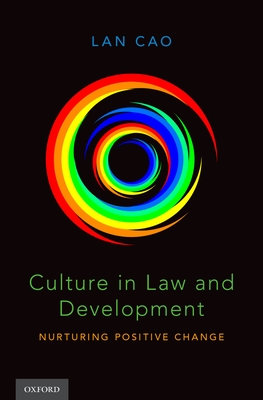 Culture in Law and Development

The growth of international law in the post-World War II era stemmed partly from the belief that universal norms would make life for the entire world's population safer, more equitable, and more conducive to each person's acquisition of basic material needs. Starting in the sixties and
seventies, some scholars and activists challenged this assumption and established the school of cultural relativism, a model that pays deference to local cultural traditions and favors them over international human rights norms. Scholars tried to create and practice a middle-ground approach
between universalism and relativism, whereby the most egregious violations would be prevented through assimilating only jus cogens norms into indigenous groups' existing cultural traditions. Such efforts at combining a few select international norms with local cultural traditions largely failed. Culture in Law and Development presents a provocative new solution to the seemingly intractable problem of combining international norms with local cultural traditions by changing culture through law and development. In this book, Lan Cao demonstrates how the gradual expansion of customary
international law (CIL) provides a model for changing culture in ways that protect and advance local populations. The book adopts a holistic view of development and argues that cultural norms that impede the human capabilities of the poor, women, and other marginal groups should be changed. The book
reveals how a more conscious, coordinated effort on such change can succeed while non-violative local traditions are otherwise honored and preserved. Cao proposes that cultural change does not have to constitute cultural disrespect, and that local societies only benefit by a careful combination of
externally wrought change and internally fostered tradition.

Lan Cao is the Betty Hutton Williams Professor of International Economic Law at Chapman University. She joined the Dale E. Fowler School of Law in 2013. Previously, she was on the faculty at William & Mary Law School for more than a decade. She has also served on the Executive Council of theAmerican Society of International Law. Her extensive publishing history includes articles in the California Law Review, the Michigan Law Review, and the Virginia Journal of International Law. She has also published a well-reviewed novel related to themes in the proposed book: Monkey Bridge (1997)and The Lotus and the Storm (2014).
Loading...
or support indie stores by buying on