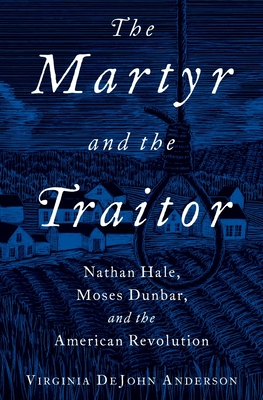 The Martyr and the Traitor (Hardcover)

In September 1776, two men from Connecticut each embarked on a dangerous mission. One of the men, a soldier disguised as a schoolmaster, made his way to British-controlled Manhattan and began furtively making notes and sketches to bring back to the beleaguered Continental Army general, George Washington. The other man traveled to New York to accept a captain's commission in a loyalist regiment before returning home to recruit others to join British forces. Neither man completed his mission. Both met their deaths at the end of a hangman's rope, one executed as a spy for the American cause and the other as a traitor to it. Neither Nathan Hale nor Moses Dunbar deliberately set out to be a revolutionary or a loyalist, yet both suffered the same fate. They died when there was every indication that Britain would win the American Revolution. Had that been the outcome, Dunbar, convicted of treason and since forgotten, might well be celebrated as a martyr. And Hale, caught spying on the British, would likely be remembered as a traitor, rather than a Revolutionary hero. In The Martyr and the Traitor, Virginia DeJohn Anderson offers an intertwined narrative of men from very similar backgrounds and reveals how their relationships within their families and communities became politicized as the imperial crisis with Britain erupted. She explores how these men forged their loyalties in perilous times and believed the causes for which they died to be honorable. Through their experiences, The Martyr and the Traitor illuminates the impact of the Revolution on ordinary lives and how the stories of patriots and loyalists were remembered and forgotten after independence.

Virginia DeJohn Anderson is Professor of History at the University of Colorado, Boulder. She is the author of New England's Generation: The Great Migration and the Formation of Society and Culture in the Seventeenth Century, Creatures of Empire: How Domestic Animals Transformed Early America, and American Journey: A History of the United States.
or support indie stores by buying on
Copyright © 2020 American Booksellers Association