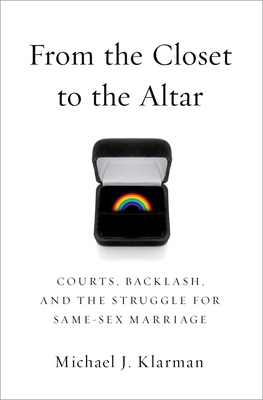 From the Closet to the Altar

Courts, Backlash, and the Struggle for Same-Sex Marriage

Same-sex marriage has become one of the most volatile issues in American politics. But if most young people support gay marriage, and if there are clear indicators that a substantial majority of the population will soon favor it, why has the outcry against it been so strong? Bancroft Prize-winning historian and legal expert Michael Klarman offers here an illuminating and engaging account of modern litigation over same-sex marriage. After looking at the treatment of gays in the decades after World War II and the birth of the modern gay rights movement with the Stonewall Rebellion in 1969, Klarman describes the key legal cases involving gay marriage and the dramatic political backlashes they ignited. He examines the Hawaii Supreme Court's ruling in 1993, which sparked a vast political backlash--with more than 35 states and Congress enacting defense-of-marriage acts--and the Massachusetts decision in Goodridge in 2003, which inspired more than 25 states to adopt constitutional bans on same-sex marriage. Klarman traces this same pattern--court victory followed by dramatic backlash--through cases in Vermont, California, and Iowa, taking the story right up to the present. He also describes some of the collateral political damage caused by court decisions in favor of gay marriage--Iowa judges losing their jobs, Senator Majority Leader Tom Daschle losing his seat, and the possibly dispositive impact of gay marriage on the 2004 presidential election. But Klarman also notes several ways in which litigation has accelerated the coming of same-sex marriage: forcing people to discuss the issue, raising the hopes and expectations of gay activists, and making other reforms like civil unions seem more moderate by comparison. In the end, Klarman discusses how gay marriage is likely to evolve in the future, predicts how the U.S. Supreme Court might ultimately resolve the issue, and assesses the costs and benefits of activists pursuing social reforms such as gay marriage through the courts. From the Closet to the Altar will stand as the definitive one-volume history of the tumultuous emergence of same-sex marriage in American life as well as a landmark study of litigation, social reform, and the phenomenon of political backlash to court decisions.

Michael J. Klarman is the Kirkland & Ellis Professor at Harvard Law School. He is the author of From Jim Crow to Civil Rights: The Supreme Court and the Struggle for Racial Equality (winner of the Bancroft Prize in History in 2005), Unfinished Business: Racial Equality in American History, and Brown v. Board of Education and the Civil Rights Movement.
Loading...
or support indie stores by buying on