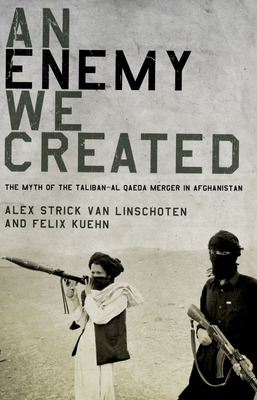 An Enemy We Created (Hardcover)

The Myth of the Taliban-Al Qaeda Merger in Afghanistan

To this day, the belief is widespread that the Taliban and al-Qaeda are synonymous, that their ideology and objectives are closely intertwined, and that they have made common cause against the West for decades. In An Enemy We Created, Alex Strick van Linschoten and Felix Kuehn debunk this myth and reveal the much more complex reality that lies beneath it. Drawing upon their unprecedented fieldwork in Afghanistan, as well as their Arabic, Dari, and Pashtu skills, the authors show that the West's present entanglement in Afghanistan is predicated on the false assumption that defeating the Taliban will forestall further terrorist attacks worldwide. While immersing themselves in Kandahar society, the authors interviewed Taliban decision-makers, field commanders, and ordinary fighters, thoroughly exploring the complexity of the relationship between the Taliban and al-Qaeda and the individuals who established both groups. They show that from the mid-1990s onward, the Taliban and al-Qaeda diverged far more often than they converged. They also argue that this split creates an opportunity to engage the Taliban on two fundamental issues: renouncing al-Qaeda and guaranteeing that Afghanistan will not be a sanctuary for international terrorists. Yet the insurgency is changing, and it could soon be too late to find a political solution. The authors contend that certain aspects of the campaign in Afghanistan, especially night raids, the killings of innocent civilians, and attempts to fragment and decapitate the Taliban are having the unintended consequence of energizing the resistance, creating more opportunities for al-Qaeda, and helping it to attain its objectives. The first book to fully untangle the myths from the realities in the relationship between the Taliban and al-Qaeda, An Enemy We Created is essential reading for anyone who wants to understand what's really happening in Afghanistan.

Alex Strick van Linschoten and Felix Kuehn are researchers and writers. They have worked in Afghanistan since 2006, focusing on the Taliban insurgency and the history of southern Afghanistan over the past four decades. They are the co-editors of a Taliban memoir entitled My Life with the Taliban.
or
Not Currently Available for Direct Purchase
Copyright © 2020 American Booksellers Association