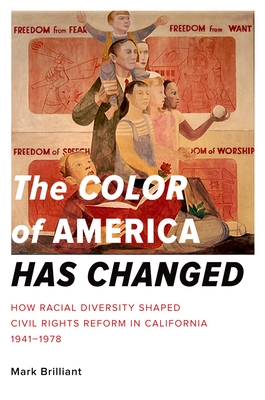 The Color of America Has Changed

From the moment that the attack on the problem of the color line, as W.E.B. DuBois famously characterized the problem of the twentieth century, began to gather momentum nationally during World War II, California demonstrated that the problem was one of color lines. In The Color of America Has Changed, Mark Brilliant examines California's history to illustrate how the civil rights era was a truly nationwide and multiracial phenomenon-one that was shaped and complicated by the presence of not only blacks and whites, but also Mexican Americans, Japanese
Americans, and Chinese Americans, among others. Focusing on a wide range of legal and legislative initiatives pursued by a diverse group of reformers, Brilliant analyzes the cases that dismantled the state's multiracial system of legalized segregation in the 1940s and subsequent battles over fair
employment practices, old-age pensions for long-term resident non-citizens, fair housing, agricultural labor, school desegregation, and bilingual education. He concludes with the conundrum created by the multiracial affirmative action program at issue in the United States Supreme Court's 1978
Regents of the University of California v. Bakke decision. The Golden State's status as a civil rights vanguard for the nation owes in part to the numerous civil rights precedents set there and to the disparate challenges of civil rights reform in multiracial places. While civil rights historians have long set their sights on the South and recently have turned their attention to the North, advancing a long civil rights movement interpretation, Mark Brilliant calls for a new understanding of civil rights history that more fully reflects the racial diversity of
America.

Mark Brilliant is an Assistant Professor of History and American Studies at the University of California, Berkeley.
Loading...
or support indie stores by buying on