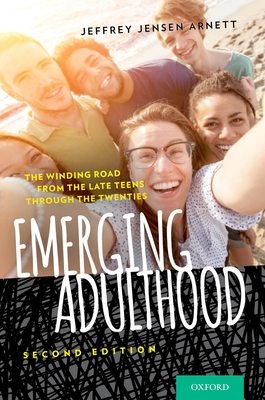 The Winding Road from the Late Teens Through the Twenties

In recent decades, the lives of people in their late teens and twenties have changed so dramatically that a new stage of life has developed. In his provocative work, Jeffrey Jensen Arnett has identified the period of emerging adulthood as distinct from both the adolescence that precedes it and
the young adulthood that comes in its wake. Arnett's new paradigm has received a surge of scholarly attention due to his book that launched the field, Emerging Adulthood. On the 10th Anniversary of the publication of his groundbreaking work, the second edition of Emerging Adulthood fully updates and expands Arnett's findings and includes brand new chapters on media use, social class issues, and the distinctive problems of this life stage. In spite of the challenges
they face, Arnett explains that emerging adults are particularly skilled at maintaining contradictory emotions--they are confident while being wary, and optimistic in the face of large degrees of uncertainty. Merging stories from the lives of emerging adults themselves with decades of research,
Arnett covers a wide range of topics, including love and sex, relationships with parents, experiences at college and work, and views of what it means to be an adult. He also refutes many of the negative stereotypes about emerging adults today, finding that they are not lazy but remarkably
hard-working in most cases, and not selfish but rather concerned with making a contribution to improving the world. As the nature of American youth and the meaning of adulthood further evolve, Emerging Adulthood will continue to be essential reading for understanding the face of modern America.

Jeffrey Jensen Arnett is a Research Professor in the Department of Psychology at Clark University in Worcester, Massachusetts. During 2005 he was a Fulbright Scholar at the University of Copenhagen, Denmark. He originally proposed the theory of emerging adulthood to describe the lives of today's18-29-year-olds, and he is the Founding President and Executive Director of the Society for the Study of Emerging Adulthood. Among his many books is an advice book for parents of emerging adults, Getting to 30 (with Elizabeth Fishel).
Loading...
or support indie stores by buying on