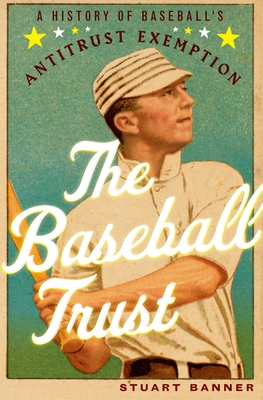 A History of Baseball's Antitrust Exemption

The impact of antitrust law on sports is in the news all the time, especially when there is labor conflict between players and owners, or when a team wants to move to a new city. And if the majority of Americans have only the vaguest sense of what antitrust law is, most know one thing about it-that baseball is exempt. In The Baseball Trust, legal historian Stuart Banner illuminates the series of court rulings that resulted in one of the most curious features of our legal system-baseball's exemption from antitrust law. A serious baseball fan, Banner provides a thoroughly entertaining history of the game as seen through the prism of an extraordinary series of courtroom battles, ranging from 1890 to the present. The book looks at such pivotal cases as the 1922 Supreme Court case which held that federal antitrust laws did not apply to baseball; the 1972 Flood v. Kuhn decision that declared that baseball is exempt even from state antitrust laws; and several cases from the 1950s, one involving boxing and the other football, that made clear that the exemption is only for baseball, not for sports in general. Banner reveals that for all the well-documented foibles of major league owners, baseball has consistently received and followed antitrust advice from leading lawyers, shrewd legal advice that eventually won for baseball a protected legal status enjoyed by no other industry in America. As Banner tells this fascinating story, he also provides an important reminder of the path-dependent nature of the American legal system. At each step, judges and legislators made decisions that were perfectly sensible when considered one at a time, but that in total yielded an outcome-baseball's exemption from antitrust law-that makes no sense at all.

Stuart Banner is Norman Abrams Professor of Law at the University of California, Los Angeles School of Law. A noted legal historian, he is the author of many books, including most recently American Property: A History of How, Why, and What We Own; Who Owns the Sky? The Struggle to Control Airspace from the Wright Brothers On; and Possessing the Pacific: Land, Settlers, and Indigenous People from Australia to Alaska.
Loading...
or support indie stores by buying on