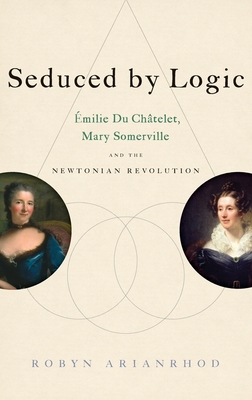 Newton's explanation of the natural law of universal gravity shattered the way mankind perceived the universe, and hence it was not immediately embraced. After all, how can anyone warm to a force that cannot be seen or touched? But for two women, separated by time and space but joined in their
passion for Newtonian physics, the intellectual power of that force drove them to great achievements. Brilliant, determined, and almost entirely self-taught, they dedicated their lives to explaining and disseminating Newton's discoveries. Robyn Arianrhod's Seduced by Logic tells the story of Emilie du Chatelet and Mary Somerville, who, despite living a century apart, were connected by their love for mathematics and their places at the heart of the most advanced scientific society of their age. When Newton published his revolutionary
theory of gravity, in his monumental Principia of 1687, most of his Continental peers rejected it for its reliance on physical observation and mathematical insight instead of religious or metaphysical hypotheses. But the brilliant French aristocrat and intellectual Emilie du Chatelet and some of her
early eighteenth-century Enlightenment colleagues--including her lover, Voltaire--realized the Principia had changed everything, marking the beginning of theoretical science as a predictive, quantitative, and secular discipline. Emilie devoted herself to furthering Newton's ideas in France, and her
translation of the Principia is still the accepted French version of this groundbreaking work. Almost a century later, in Scotland, Mary Somerville taught herself mathematics and rose from genteel poverty to become a world authority on Newtonian physics. She was f ted by the famous French Newtonian,
Pierre Simon Laplace, whose six-volume Celestial Mechanics was considered the greatest intellectual achievement since the Principia. Laplace's work was the basis of Mary's first book, Mechanism of the Heavens; it is a bittersweet irony that this book, written by a woman denied entry to university
because of her gender, remained an advanced university astronomy text for the next century. Combining biography, history, and popular science, Seduced by Logic not only reveals the fascinating story of two incredibly talented women, but also brings to life a period of dramatic political and scientific change. With lucidity and skill, Arianrhod explains the science behind the story, and
explores - through the lives of her protagonists - the intimate links between the unfolding Newtonian revolution and the development of intellectual and political liberty.

Robyn Arianrhod is an Honorary Research Associate in the School of Mathematical Sciences at Monash University. She is the author of Einstein's Heroes.
Loading...
or support indie stores by buying on