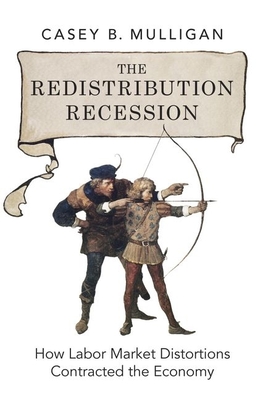 Redistribution, or subsidies and regulations intended to help the poor, unemployed, and financially distressed, have changed in many ways since the onset of the recent financial crisis. The unemployed, for instance, can collect benefits longer and can receive bonuses, health subsidies, and
tax deductions, and millions more people have became eligible for food stamps. Economist Casey B. Mulligan argues that while many of these changes were intended to help people endure economic events and boost the economy, they had the unintended consequence of deepening-if not causing-the recession. By dulling incentives for people to maintain their own living standards,
redistribution created employment losses according to age, skill, and family composition. Mulligan explains how elevated tax rates and binding minimum-wage laws reduced labor usage, consumption, and investment, and how they increased labor productivity. He points to entire industries that slashed
payrolls while experiencing little or no decline in production or revenue, documenting the disconnect between employment and production that occurred during the recession. The book provides an authoritative, comprehensive economic analysis of the marginal tax rates implicit in public and private
sector subsidy programs, and uses quantitative measures of incentives to work and their changes over time since 2007 to illustrate production and employment patterns. It reveals the startling amount of work incentives eroded by the labyrinth of new and existing social safety net program rules, and,
using prior results from labor economics and public finance, estimates that the labor market contracted two to three times more than it would have if redistribution policies had remained constant. In The Redistribution Recession, Casey B. Mulligan offers hard evidence to contradict the notion that work incentives suddenly stop mattering during a recession or when interest rates approach zero, and offers groundbreaking interpretations and precise explanations of the interplay between
unemployment and financial markets.

Professor of Economics, University of Chicago, author of Parental Priorities and Economic Inequality, weekly contributor to Economix blog for the New York Times
Loading...
or
Not Currently Available for Direct Purchase