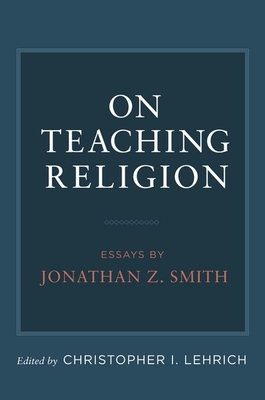 For more than thirty years, Jonathan Z. Smith has been among the most important voices of critical reflection within the academic study of religion. Smith has also produced a significant corpus of essays and lectures on teaching and on the essential role of academic scholarship on religion in matters of education and public policy. Education is not a side issue for Smith, and his essays continually shed light on fundamental questions. What differentiates college from high school? What are the proper functions of an introductory course? What functions should a department serve in undergraduate and graduate education? How should a major or concentration be conceived-if at all? What roles should the academic guilds play in public discourse on education and on religion? Most importantly, what does it mean to say that one is both a scholar and a teacher, and what responsibilities does this entail? Smith's writings on these crucial issues for education have been largely inaccessible until now. Some pieces in this book appeared in education journals, while others were collected in specialist volumes of conference proceedings. Many were originally delivered as keynote speeches to the American Academy of Religion and other major scholarly organizations, and although scholars reminisce about hearing Smith deliver them, the works themselves are not readily available. On Teaching Religion collects the best of these essays and lectures into one volume, along with a new essay by Smith.

Christopher I. Lehrich is Assistant Professor of Religion, Boston University.
Loading...
or support indie stores by buying on
(This book is on backorder)