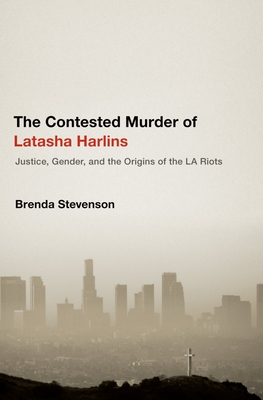 The Contested Murder of Latasha Harlins

Justice, Gender, and the Origins of the La Riots

Helicopters patrolled low over the city, filming blocks of burning cars and buildings, mobs breaking into storefronts, and the vicious beating of truck driver Reginald Denny. For a week in April 1992, Los Angeles transformed into a cityscape of rage, purportedly due to the exoneration of four
policemen who had beaten Rodney King. It should be no surprise that such intense anger erupted from something deeper than a single incident. In The Contested Murder of Latasha Harlins, Brenda Stevenson tells the dramatic story of an earlier trial, a turning point on the road to the 1992 riot. On March 16, 1991, fifteen-year-old Latasha Harlins, an African American who lived locally, entered the Empire Liquor Market at 9172 South Figueroa
Street in South Central Los Angeles. Behind the counter was a Korean woman named Soon Ja Du. Latasha walked to the refrigerator cases in the back, took a bottle of orange juice, put it in her backpack, and approached the cash register with two dollar bills in her hand-the price of the juice. Moments
later she was face-down on the floor with a bullet hole in the back of her head, shot dead by Du. Joyce Karlin, a Jewish Superior Court judge appointed by Republican Governor Pete Wilson, presided over the resulting manslaughter trial. A jury convicted Du, but Karlin sentenced her only to probation,
community service, and a $500 fine. The author meticulously reconstructs these events and their aftermath, showing how they set the stage for the explosion in 1992. An accomplished historian at UCLA, Stevenson explores the lives of each of these three women-Harlins, Du, and Karlin-and their very different worlds in rich detail. Through the three women, she not only reveals the human reality and social repercussions of this triangular collision, she also
provides a deep history of immigration, ethnicity, and gender in modern America. Massively researched, deftly written, The Contested Murder of Latasha Harlins will reshape our understanding of race, ethnicity, gender, and-above all-justice in modern America.

Brenda Stevenson is Professor of History at the University of California, Los Angeles. Her books include The Journals of Charlotte Forten Grimke and Life in Black and White: Family and Community in the Slave South, selected as an Outstanding Book by the Gustavus Myers Center for the Study of HumanRights in North America.
Loading...
or support indie stores by buying on