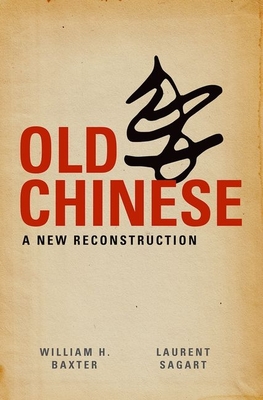 This book introduces a new linguistic reconstruction of the phonology, morphology, and lexicon of Old Chinese, the first Sino-Tibetan language to be reduced to writing. Old Chinese is the language of the earliest Chinese classical texts (1st millennium BCE) and the ancestor of later varieties of Chinese, including all modern Chinese dialects. William Baxter and Laurent Sagart's new reconstruction of Old Chinese moves beyond earlier reconstructions by taking into account important new evidence that has recently become available: better documentation of Chinese dialects that preserve archaic features, such as the Min and Waxiang dialects; better documentation of languages with very early loanwords from Chinese, such as the Hmong-Mien, Tai-Kadai and Vietnamese languages; and a flood of Chinese manuscripts from the first millennium BCE, excavated or discovered in the last several decades. Baxter and Sagart also incorporate recent advances in our understanding of the derivational processes that connect different words that have the same root. They expand our knowledge of Chinese etymology and identify, for the first time, phonological markers of pre-Han dialects, such as the development of *r to -j in a group of east coast dialects, but to -n elsewhere. The most up-to-date reconstruction available, Old Chinese: A New Reconstruction brings the methodology of Old Chinese reconstruction closer to that of comparative reconstructions that have been used successfully in other language families. It is critical reading for anyone seeking an advanced understanding of Old Chinese.

William H. Baxter is Professor in the Department of Asian Languages and Cultures and the Department of Linguistics, University of Michigan, Ann Arbor. His research in historical linguistics includes work on both the history of Chinese and its dialects and on the use of mathematical techniques to reconstruct linguistic history. Laurent Sagart is a senior scientist with the French CNRS. He has published widely in Chinese and East Asian language historical linguistics. He is interested in language classification, notably the internal classification of Austronesian, Sinitic and Sino-Tibetan, in the genetic relationships among East Asian language groups, and in East Asian linguistic prehistory.
or support indie stores by buying on
Copyright © 2020 American Booksellers Association