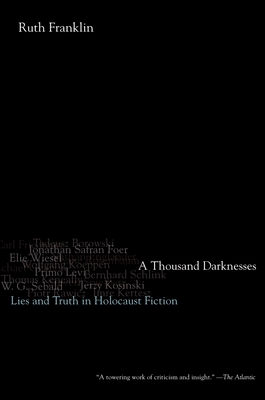 Lies and Truth in Holocaust Fiction

What is the difference between writing a novel about the Holocaust and fabricating a memoir? Do narratives about the Holocaust have a special obligation to be 'truthful'--that is, faithful to the facts of history?
Or is it okay to lie in such works? In her provocative study A Thousand Darknesses, Ruth Franklin investigates these questions as they arise in the most significant works of Holocaust fiction, from Tadeusz Borowski's Auschwitz stories to Jonathan Safran Foer's postmodernist family history. Franklin argues that the memory-obsessed culture of the last few decades has led us to mistakenly focus on testimony as the only valid form of Holocaust writing. As even the most canonical texts have come under scrutiny for their fidelity to the facts, we have lost sight of the essential role that imagination plays in the creation of any literary work, including the memoir. Taking a fresh look at memoirs by Elie Wiesel and Primo Levi, and examining novels by writers such as Piotr Rawicz, Jerzy Kosinski, W.G. Sebald, and Wolfgang Koeppen, Franklin makes a persuasive case for literature as an equally vital vehicle for understanding the Holocaust (and for memoir as an equally ambiguous form). The result is a study of immense depth and range that offers a lucid view of an often cloudy field.

Ruth Franklin is a senior editor at The New Republic.
Loading...
or
Not Currently Available for Direct Purchase