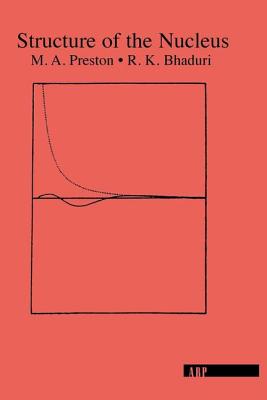 Structure of the Nucleus

A graduate-level one-volume textbook and reference work on the structure and physics of atomic nuclei. Throughout this book the underlying emphasis is on how a nucleus is constituted through the interaction between the nucleons. The book is structured into three parts: the first part contains a detailed treatment of the two-nucleon force and of basic model-independent nuclear properties; the second part discusses the experimental results of nuclear models and their bases in fundamental theory; the third part deals in some detail with alpha-decay and fission.

Matthias Brack was born in Basel, Switzerland, and studied IN Basel and at the Niels Bohr Institute (NBI) in Copenhagen. He spent his post-doctorate years at the NBI, Stony Brook (SUNY), and Grenoble (ILL), and is currently a professor of physics at the University of Regensburg, Germany. His main research efforts are directed toward unraveling the quantum behavior of many-fermion systems in nuclear, atomic and condensed matter physics by semiclassical methods. Rajat K. Bhaduri was born in Raipur, India. He is currently an emeritus professor of physics at McMaster University, Hamilton, Canada. He is the author, or co-author, of two other books, Models of the Nucleon and Structure of the nucleus. He is broadly interested in physics, including its semiclassical aspect.
Loading...
or support indie stores by buying on