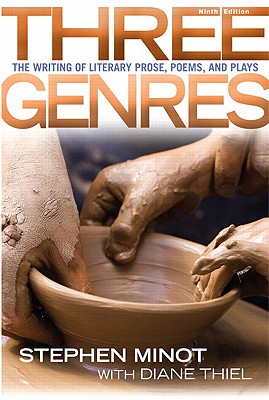 The Writing of Literary Prose, Poems and Plays

Key Benefit: Three Genres gives readers a basic introduction to fiction/ literary nonfiction, poetry, and drama and helps them develop their creative skills in each area. Key Topics Fourteen new selections have been added including nonfiction by Edwidge Danticat, short fiction by Tim O' Brien, Jamaica Kincaid and Sharon Oard Warner, and poetry by a number of poets including Joy Harjo and William Stafford. There is an increased focus on literary nonfiction. The poetry section includes additional discussions and examples, as well as a chapter devoted specifically to revision, including an example of a revision narrative and several exercises for developing drafts. Market: For anyone with a desire to create creatively in different mediums.

About Stephen Minot Stephen Minot, Professor Emeritus of the Creative Writing Department at the University of California, Riverside, has taught creative writing for over thirty years. Over the span of his very successful career, Professor Minot authored three novels, two collections of short stories, and three textbooks including Reading Fiction and Literary Nonfiction, The Fourth Genre. His short stories have appeared in a variety of magazines and literary quarterlies including The Atlantic, Harpers, The Kenyon Review, The Virginia Quarterly Review, and the Sewanee Review, just to name a few. Professor Minot's work has also appeared in the O. Henry Prize Stories collection and The Best American Short Stories. He is also the recipient of the Atlantic First Award, the Saxton Memorial Fellowship, and the National Endowment for the Arts Fellowship for writing. Professor Minot and Virginia, his wife, split their time between California and Maine. About Diane Thiel Diane Thiel is the author of eight books of poetry, nonfiction and creative writing pedagogy, including Echolocations, Resistance Fantasies, Winding Roads: Exercises in Writing Creative Nonfiction, Cross Roads: Creative Writing in Four Genres, and Open Roads: Exercises in Writing Poetry. Thiel's translation of Alexis Stamatis's novel, American Fugue, received an NEA Award. Her work appears in many journals, is re-printed in over fifty anthologies, and has been translated widely. She has received numerous awards, such as the PEN Translation, Robert Frost, and Robinson Jeffers Awards, and was a Fulbright Scholar. Thiel has taught creative writing for twenty years and is a Professor at the University of New Mexico.
or
Not Currently Available for Direct Purchase
Copyright © 2020 American Booksellers Association