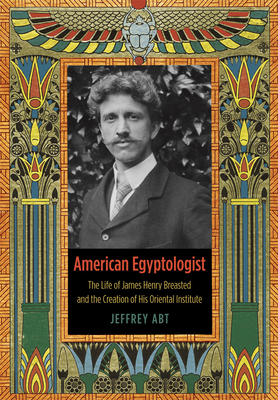 James Henry Breasted (1865–1935) had a career that epitomizes our popular image of the archaeologist. Daring, handsome, and charismatic, he traveled on expeditions to remote and politically unstable corners of the Middle East, helped identify the tomb of King Tut, and was on the cover of Time magazine. But Breasted was more than an Indiana Jones—he was an accomplished scholar, academic entrepreneur, and talented author who brought ancient history to life not just for students but for such notables as Teddy Roosevelt and Sigmund Freud.

In American Egyptologist, Jeffrey Abt weaves together the disparate strands of Breasted’s life, from his small-town origins following the Civil War to his evolution into the father of American Egyptology and the founder of the Oriental Institute in the early years of the University of Chicago. Abt explores the scholarly, philanthropic, diplomatic, and religious contexts of his ideas and projects, providing insight into the origins of America’s most prominent center for Near Eastern archaeology.
An illuminating portrait of the nearly forgotten man who demystified ancient Egypt for the general public, American Egyptologist restores James Henry Breasted to the world and puts forward a brilliant case for his place as one of the most important scholars of modern times.

Jeffrey Abt is professor in the James Pearson Duffy Department of Art and Art History at Wayne State University. He is the author of A Museum on the Verge: A Socioeconomic History of the Detroit Institute of Arts, 1885–2000.


Praise For American Egyptologist: The Life of James Henry Breasted and the Creation of His Oriental Institute…

“Abt’s book is a thorough and enjoyable biography of the father of American Egyptology, enhanced by previously unpublished material and photographs from the archives of the Oriental Institute. The extraordinary life and accomplishments of James Henry Breasted finally have the treatment they deserve.”

“American Egyptologist is ably written and more than meticulously researched. Abt has rescued for us the most important American student of the ancient Near East and one of the twentieth century’s leading academics. We are also able to see how brilliant scholars like James Breasted shaped the university system and the education of a democratic electorate, even as people like him were molded by wealthy donors. Abt finally contributes to our understanding of debates over the secularization of the collegiate world. Altogether, a virtuoso performance.”

“Abt has written the definitive study of Breasted’s career, deftly showing the many ways Breasted exemplified his time and his field while also showing how extraordinary the man was. The book succeeds on many levels—as a study of an academic career; as a portrait of issues in American higher education in the early twentieth century; as a discussion of museums and their role in both universities and cities in America; as a study in organizational development and fundraising; and above all, as a portrait of an exceptional life with its overseas adventures and long-lasting impact on the fields of Egyptology and archaeology in the Middle East. A remarkable book.”

“Abt has done an excellent job of narrating Breasted’s scholarly life and accomplishments. He deftly fills in the various backgrounds and influences—from the mentorship of William Rainey Harper and Adolf Erman to the archaeological politics of interwar Egypt and the institutional politics of the University of Chicago—and, since Breasted was always interested in larger issues related to society, history, and religion, Abt provides sensitive insight into the contemporary worldview of the educated, both lay and professional. Well written and illustrated, this is a book that will appeal to all seriously interested in moving beyond Indiana Jones to a deeper understanding of how scholars have reconstructed ancient Egypt.”

"American Egyptologist is the fascinating story of a man and the formation of an institution whose roots lie in the tense politics of the Middle East but whose mission is to keep alive the histories of the ancient Near East."

“Much of the appeal of American Egyptologist lies in its portrait of the America of a century or so ago. . . .All this will make a fascinating read for Egyptologists and those interested in the development of American higher education.”

"Mr. Abt's biography is almost encyclopedic, but the narrative is always visible amid the detail, and footnotes and references are used wisely. It is unlikely that the story of this restless scholar will need to be written again."

“Breasted would present a daunting challenge to any biographer, but Jeffrey Abt brings a number of pertinent skills into play with good results. Drawing on his established track record as an institutional historian, Abt is able to make sense of Breasted’s incomparable and almost incredibly complex academic entrepreneurship. . . . The personal touches about Breasted are present, tastefully told and in just the right depth to delineate a real human being and to suggest how his personal life conditioned his professional life. . . . Stripping away some of the gilding allows an even brighter personality and more authentic character to shine through.”
— Egyptian Archaeology

“American Egyptologist is the comprehensive biography of Breasted that has long been needed in the field of disciplinary history. The book succeeds on two fronts: as a detailed biography of one prominent individual’s life, and as a contextualization of that life within the larger intellectual and social currents of the late nineteenth and early twentieth century. . . . Contributes a valuable resource to those interested in the roots of Egyptology in America.”
— Journal of the American Oriental Society
or
Not Currently Available for Direct Purchase
Copyright © 2020 American Booksellers Association