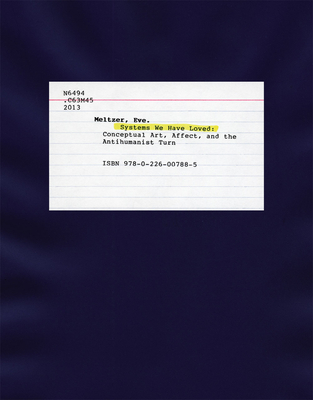 Systems We Have Loved

By the early 1960s, theorists like Lévi-Strauss, Lacan, Foucault, and Barthes had created a world ruled by signifying structures and pictured through the grids of language, information, and systems. Artists soon followed, turning to language and its related forms to devise a new, conceptual approach to art making. Examining the ways in which artists shared the structuralist devotion to systems of many sorts, Systems We Have Loved shows that even as structuralism encouraged the advent of conceptual art, it also raised intractable problems that artists were forced to confront. Considering such notable art figures as Mary Kelly, Robert Morris, Robert Smithson, and Rosalind Krauss, Eve Meltzer argues that during this period the visual arts depicted and tested the far-reaching claims about subjectivity espoused by theorists. She offers a new way of framing two of the twentieth century’s most transformative movements—one artistic, one expansively theoretical—and she reveals their shared dream—or nightmare—of the world as a system of signs. By endorsing this view, Meltzer proposes, these artists drew attention to the fictions and limitations of this dream, even as they risked getting caught in the very systems they had adopted. The first book to describe art’s embrace of the world as an information system, Systems We Have Loved breathes new life into the study of conceptual art.

Praise For Systems We Have Loved: Conceptual Art, Affect, and the Antihumanist Turn…

"Opens a rich vein of inquiry into art history in the United States. . . . Systems We Have Loved reveals some of what our cherished systems have obscured. It also suggests what we might gain from seeing the work of art anew."
— CAA Reviews

“Meltzer is at her most brilliant when discussing Mary Kelly’s evasive and expansive work, which serves to bracket the text. Meltzer initiates the book with a close reading of Antepartum, and returns to Kelly’s work in the final chapter with a thorough investigation of the six-year, multipart work, Post-PartumDocument. . . . Post-Partum Document . . . mesmerizes under the illuminative reading of Meltzer’s analysis. It is a careful parsing, not only of the information of grief and Lacanian science, but of the forms information assumes, and the complexes of interstitial space made available so that affect may occur—and better connect person to object, object to art, and, ultimately, person to person.”

“Simply put, Systems We Have Loved is a gorgeous discussion of art, ideas, and their intercourse. But it is the tangible patience, care, and aptness of Eve Meltzer’s own language that bring about the book’s specific and considerable accomplishment: here is a successful and nuanced reawakening of the fervent optimism that, surprisingly, engendered some of the ‘coolest’ art produced under the rubric of conceptualism.”

“Focusing on the problem of the belated antihumanist subject and its adventures in the art of the 1970s, Systems We Have Loved shows how fully imbricated structuralism was in the art of this period. Under structuralism, the subject became a mere effect of preexisting systems; Meltzer shows how artists both engaged and resisted this condition via the deployment of affect in their work. Highlights of the analysis include her examination of Mary Kelly’s rendering of what the ‘entry into the symbolic’ actually looks like; her discussion of Robert Smithson’s invocation of West Coast art and culture as a counterpoint to structuralism, and her convincing unification of Robert Morris’s seemingly eclectic practice under the rubric of ‘the turn.’ Thanks to its clarity and the subtlety with which it synthesizes a broad range of thinking about system and affect in this period, Systems We Have Loved makes structuralism fresh again.”

“Affect theory is vague but pervasive in art history, criticism, and theory. Ideas about affect are taken from philosophy, cognitive psychology, feminism, clinical practice, political science, and anthropology, and loosely applied to a wide range of contemporary art that seems to have to do with emotion, feeling, or the senses. Eve Meltzer’s book is a genuine breakthrough in this literature: she gives affect an exact art historical context, a determinate relation to structuralist theory, and a central genealogy in postmodernism. Systems We Have Loved argues that the most apparently ‘disaffected, dry, and intellectually distant’ projects of conceptual art, such as Mary Kelly’s Post-Partum Document, actually produce an ‘intensity,’ as Gilles Deleuze would say: an affective charge that exceeds the system exactly because the system works diligently to silence it. Systems We Have Loved is a model for understanding how affect can make sense in art history.”

— James Elkins, School of the Art Institute of Chicago

Eve Meltzer is assistant professor of visual studies and visual culture in the Gallatin School of Individualized Study at New York University.
Loading...
or
Not Currently Available for Direct Purchase