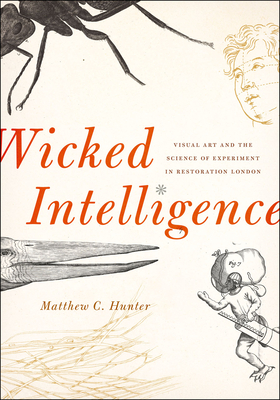 Visual Art and the Science of Experiment in Restoration London

In late seventeenth-century London, the most provocative images were produced not by artists, but by scientists. Magnified fly-eyes drawn with the aid of microscopes, apparitions cast on laboratory walls by projection machines, cut-paper figures revealing the “exact proportions” of sea monsters—all were created by members of the Royal Society of London, the leading institutional platform of the early Scientific Revolution. Wicked Intelligence reveals that these natural philosophers shaped Restoration London’s emergent artistic cultures by forging collaborations with court painters, penning art theory, and designing triumphs of baroque architecture such as St Paul’s Cathedral.
Matthew C. Hunter brings to life this archive of experimental-philosophical visualization and the deft cunning that was required to manage such difficult research. Offering an innovative approach to the scientific image-making of the time, he demonstrates how the Restoration project of synthesizing experimental images into scientific knowledge, as practiced by Royal Society leaders Robert Hooke and Christopher Wren, might be called “wicked intelligence.” Hunter uses episodes involving specific visual practices—for instance, concocting a lethal amalgam of wax, steel, and sulfuric acid to produce an active model of a comet—to explore how Hooke, Wren, and their colleagues devised representational modes that aided their experiments. Ultimately, Hunter argues, the craft and craftiness of experimental visual practice both promoted and menaced the artistic traditions on which they drew, turning the Royal Society projects into objects of suspicion in Enlightenment England.
The first book to use the physical evidence of Royal Society experiments to produce forensic evaluations of how scientific knowledge was generated, Wicked Intelligence rethinks the parameters of visual art, experimental philosophy, and architecture at the cusp of Britain’s imperial power and artistic efflorescence.

Praise For Wicked Intelligence: Visual Art and the Science of Experiment in Restoration London…

"A distinctive pleasure of Hunter’s work is that he so obviously shares with his subjects a commitment to wicked intelligence, coming at received scholarly narratives surreptitiously, obliquely, by surprise."
— Critical Inquiry

"There are some seriously impressive analytical set pieces in this book, and they are often driven by thoughtful, close readings of images."
— Journal of British Studies

“Wicked Intelligence is an exemplary work of interdisciplinary scholarship, and it is on account of this interdisciplinarity that it will surely become an influential book. . . . The best account to date of Hooke’s approach to natural-philosophical inquiry.”
— Huntington Library Quarterly

“Successful in showing how a cross-disciplinary study adds fresh insights into well-worn topics among specialists.”
— British Journal for the History of Science

“This is a remarkable book. With an intelligence to rival that of the experimental philosophers he writes about, Matthew C. Hunter traces the interlaced world of science and art in late seventeenth-century London. The wickedness of that lost world – acrimonious, intrusive, thieving – emerges in a visual archive of natural phenomena that Hunter explains in magical detail.”
— Art History

“Complicates our understanding of the Royal Society from the 1660s to the opening years of the eighteenth century in all kinds of wonderful, difficult, and rewarding ways. . . . Wicked Intelligence masterfully conjoins intellectual history and a materially sensitive mode of art history. On both accounts, the book is endlessly thought-provoking and must be required reading for anyone interested in the relationship between the visual arts and early modern science.”
— Historical Studies in the Natural Sciences

“Beautifully written and illustrated, Hunter has delivered a model of interdisciplinary work beyond the categories of art and science and the confines of their histories.”
— NTM Journal of the History of Science, Technology, and Medicine

“No study in recent years on the arts in early modern Britain is as intelligent and inventive as Wicked Intelligence. Always attuned to the elusiveness of objects and their capacity to stimulate unexpected thoughts, Matthew C. Hunter follows Latourian hybrids as they circulate through Restoration experimental culture and brilliantly articulates the material intelligence at work in the Royal Society. Hunter’s writing is compelling and witty, and this book exemplifies the very wicked intelligence that he traces through Restoration experimental philosophy.”
— Michael Gaudio, University of Minnesota

“In this delightful account of Restoration London, Matthew C. Hunter opens the curtain on a drama where experimental intelligence demands the convergence of philosophical, visual, and material cultures. Beyond his primary dramatis personae—Robert Hooke, Christopher Wren, and Peter Lely—he animates a diverse network of persons and things that brings the Royal Society to life as an epistemological enterprise determined to shape the nature of knowledge in the midst of (and facilitated by) new technologies, new markets, and new social sites. He illuminates a wild range of phenomena (from semaphore codes to psychotropic chemicals, the perspectograph to the great model of St. Paul’s Cathedral), but Hunter never loses sight of his overarching question of how the process of knowing was understood in the closing decades of the seventeenth century. Important as Wicked Intelligence is as a very particular contribution to art history and the history of science, I consider it essential reading for anyone interested in the ways that object culture and image culture become integral to the production and circulation of knowledge.”
— Bill Brown, University of Chicago

“Scrupulously researched, elegantly written, and ranging across art history, cultural history, and the history of science, Matthew C. Hunter’s Wicked Intelligence is cross-disciplinary scholarship at its best. Original and challenging in its judgments, it invites us to rethink the relations between art and science in late seventeenth-century Britain.”
— John Brewer, California Institute of Technology

Matthew C. Hunter is assistant professor in the Department of Art History and Communication Studies at McGill University. He is coeditor of Beyond Mimesis and Convention: Representation in Art and Science and The Clever Object and an editor of Grey Room. In 2016, he received the Arthur Kingsley Porter Prize.
or
Not Currently Available for Direct Purchase