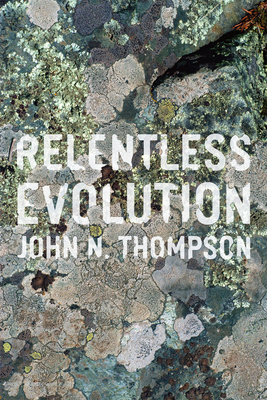 At a glance, most species seem adapted to the environment in which they live. Yet species relentlessly evolve, and populations within species evolve in different ways. Evolution, as it turns out, is much more dynamic than biologists realized just a few decades ago. In Relentless Evolution, John N. Thompson explores why adaptive evolution never ceases and why natural selection acts on species in so many different ways. Thompson presents a view of life in which ongoing evolution is essential and inevitable. Each chapter focuses on one of the major problems in adaptive evolution: How fast is evolution? How strong is natural selection? How do species co-opt the genomes of other species as they adapt? Why does adaptive evolution sometimes lead to more, rather than less, genetic variation within populations? How does the process of adaptation drive the evolution of new species? How does coevolution among species continually reshape the web of life? And, more generally, how are our views of adaptive evolution changing? Relentless Evolution draws on studies of all the major forms of life—from microbes that evolve in microcosms within a few weeks to plants and animals that sometimes evolve in detectable ways within a few decades. It shows evolution not as a slow and stately process, but rather as a continual and sometimes frenetic process that favors yet more evolutionary change.

“Relentless Evolution is a masterful synthesis of scientific fields that are expanding at astonishing speed. Surveying research as varied as lab experiments on bacteria to millions of years of coevolution between insects and flowers, John N. Thompson provides readers with a twenty-first-century view of evolutionary change, unfolding all around us and shaping our world.”

“In a world of relentless environmental change, occurring at a rate unprecedented in human history, the issue of the speed of evolutionary adaptation has taken on great significance. Which species and populations will be able to adapt and continue to deliver natural services to humanity? What rates of change will still make adaptation possible and maintain ecosystem functioning? We know that evolution is not the gradual process once imagined, and that natural selection can act very quickly, but when, where, and how will evolution be fast enough to help civilization to survive? Relentless Evolution, written by a distinguished evolutionary biologist, brilliantly provides the scientific background against which these and related questions can be addressed. Everyone who cares about the environment will want it on their shelf.”

John N. Thompson is the Distinguished Professor of Ecology and Evolutionary Biology at the University of California, Santa Cruz.
Loading...
or
Not Currently Available for Direct Purchase