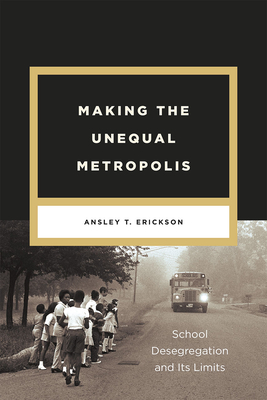 School Desegregation and Its Limits (Historical Studies of Urban America)

In a radically unequal United States, schools are often key sites in which injustice grows. Ansley T. Erickson’s Making the Unequal Metropolis presents a broad, detailed, and damning argument about the inextricable interrelatedness of school policies and the persistence of metropolitan-scale inequality. While many accounts of education in urban and metropolitan contexts describe schools as the victims of forces beyond their control, Erickson shows the many ways that schools have been intertwined with these forces and have in fact—via land-use decisions, curricula, and other tools—helped sustain inequality.

Taking Nashville as her focus, Erickson uncovers the hidden policy choices that have until now been missing from popular and legal narratives of inequality. In her account, inequality emerges not only from individual racism and white communities’ resistance to desegregation, but as the result of long-standing linkages between schooling, property markets, labor markets, and the pursuit of economic growth. By making visible the full scope of the forces invested in and reinforcing inequality, Erickson reveals the complex history of, and broad culpability for, ongoing struggles in our schools.


Praise For Making the Unequal Metropolis: School Desegregation and Its Limits (Historical Studies of Urban America)…

“Erickson’s detailed analysis makes these processes explicit and sets her work apart from conventional legal and historical accounts of desegregation in other key ways. First, her meticulous analysis spans more than fifty years of segregation and desegregation. Second, Erickson’s work stands out in its approach to understanding government culpability as a problem of political economy. She critiques de facto segregation narratives for masking state involvement, and demonstrates ways that state power operated across levels of government to maintain educational inequality. The book combines an expansive chronological scope with a political economy approach, and as a result provides countless examples of city planners, real estate developers, business leaders, and municipal officials making everyday decisions that ultimately perpetuated educational inequalities.”
— Historical Studies in Education

“Making the Unequal Metropolis provides the model for a comprehensive history that explores how factors both within the school system and without have interacted to increase inequality. Erickson convincingly demonstrates that neither white flight nor de facto residential segregation were the dominant factors that gutted policy efforts aimed at increasing equality; instead, it was the district’s enactment of those policies. In making multiple and varied decisions that redistributed ‘material, human, and social’ resources to privileged white suburban students—‘even within policy interventions ostensibly targeting equality’—educational inequality was remade.”
— History of Education Quarterly

“Erickson argues persuasively that schools are significant markers of valued resources (land, high-quality housing and other properties, safety, family-oriented neighborhoods) and serve as proxies for those who possess such resources. . . . She reminds concerned readers, particularly educators and policy-makers, that curative policies and interventions absent an understanding of educational inequality’s historical foundations in slavery and racism are bound only to reinforce current disparities. Additionally, Erickson reveals that attempts at educational equality that are decoupled from integrated fair housing and urban renewal projects will only remake inequality.”
— Journal of Children and Poverty

“Can our schools make us equal? As Erickson reminds us, this ever-present question ignores the historic role of public schools in creating and reinforcing the same disparities that the schools are now called upon to correct. Even as courts ordered racial desegregation, decisions about where to locate schools—and what to teach in them—structured new inequalities across the American urban landscape. Nobody has done more to illuminate these hidden decisions and deceptions than Erickson. And nobody can understand our current educational impasse without reading her meticulous and inspired book.”
— Jonathan Zimmerman, New York University

“Making the Unequal Metropolis achieves that rare balance of deep archival engagement and immediate contemporary relevance.  Through this impressive account of postwar Nashville, Erickson makes compelling connections between institutional expressions of white power and the use of schools to preserve the educational, residential, and economic advantages of white people. In their location, curricula, and apparent social benefits, schools helped those in power selectively encourage economic investment and divide the haves from the have-nots. Even well-meaning reforms meant to ensure growth or desegregation could advance new forms of white power and privilege if schools remained under the control of those more concerned with order than justice. Segregation, we learn yet again, is no accident, inequality no forgone conclusion. But unlike other authors, Erickson issues a powerful and useful charge for understanding and undoing both: pay attention to our schools.”
— N. D. B. Connolly, author of A World More Concrete

“This revealing book is important for its resonant history of school desegregation, for its spatial imagination, for its account of the modern South, and for the bright light it shines on crucial mechanisms of inequality. Researched at depth and written with felicity, Making the Unequal Metropolis sharpens understanding as it explores fundamental fault lines in the American experience.”
— Ira I. Katznelson, author of Fear Itself: The New Deal and the Origins of Our Time

“This powerful history of four decades of school desegregation in Nashville demonstrates how federal and municipal policies consistently reproduced racial inequality across the metropolitan landscape and inside the classrooms of one of the nation’s most successful ‘statistically desegregated’ districts during the era of court-ordered busing. In Erickson’s sobering assessment, Nashville’s white leadership and educational system always favored economic growth over racial equality, white suburbs over urban neighborhoods, and market logics over democracy and full citizenship.”
— Matthew Lassiter

“Drawing on extensive archival research and over fifty original oral histories, Making the Unequal Metropolis is a deeply researched and analytically sophisticated book that builds on the work of historians of education, politics, and civil rights. . . . It is an important and timely book. Over six decades after Brown v. Board of Education (1954), Erickson’s study provides new ways of thinking, talking, and teaching about the history and legacies of school segregation in the United States.”
— Journal of Southern History

"Wherever this historiography moves next, scholars will do well to engage with the work of [Erickson]...[Making the Unequal Metropolis] deserves a thorough read to better understand how American society became so unequal during the twentieth century and, possibly, to deal with how to unmake the ‘hundreds of small choices’ (p. 4)."
— History of Education: Journal of the History of Education Society

Ansley T. Erickson is assistant professor of history and education at Teachers College, Columbia University.
Loading...
or
Not Currently Available for Direct Purchase