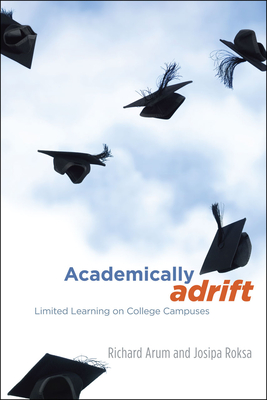 In spite of soaring tuition costs, more and more students go to college every year. A bachelor’s degree is now required for entry into a growing number of professions. And some parents begin planning for the expense of sending their kids to college when they’re born. Almost everyone strives to go, but almost no one asks the fundamental question posed by Academically Adrift: are undergraduates really learning anything once they get there?

For a large proportion of students, Richard Arum and Josipa Roksa’s answer to that question is a definitive no. Their extensive research draws on survey responses, transcript data, and, for the first time, the state-of-the-art Collegiate Learning Assessment, a standardized test administered to students in their first semester and then again at the end of their second year. According to their analysis of more than 2,300 undergraduates at twenty-four institutions, 45 percent of these students demonstrate no significant improvement in a range of skills—including critical thinking, complex reasoning, and writing—during their first two years of college. As troubling as their findings are, Arum and Roksa argue that for many faculty and administrators they will come as no surprise—instead, they are the expected result of a student body distracted by socializing or working and an institutional culture that puts undergraduate learning close to the bottom of the priority list.

Academically Adrift holds sobering lessons for students, faculty, administrators, policy makers, and parents—all of whom are implicated in promoting or at least ignoring contemporary campus culture. Higher education faces crises on a number of fronts, but Arum and Roksa’s report that colleges are failing at their most basic mission will demand the attention of us all.

“A decade ago the United States led the world in the number of college graduates. Today this is no longer the case. Academically Adrift raises serious questions about the quality of the academic and social experiences of college students. Armed with extensive data and comprehensive analyses, the authors provide a series of compelling solutions for how colleges can reverse the tide and renew their emphases on learning. This first-rate book demonstrates why colleges, like K–12 institutions, now more than ever require major reforms to sustain our democratic society.”
— Barbara Schneider, Michigan State University

“This provocative study demands attention at all levels, including leaders of higher education, researchers, students, parents, and the general public. It confirms that students who encounter faculty with high expectations and demanding courses tend to learn more than others. Among its most troubling findings are the persistent racial gaps in learning rates during college. The implications of these and other findings should be widely discussed.”
— Adam Gamoran, University of Wisconsin­–Madison

“This might be the most important book on higher education in a decade. Combined with students’ limited effort and great disparities in benefits among students, Arum and Roksa’s findings raise questions that should have been raised long ago about who profits from college and what colleges need to do if they are to benefit new groups of students. In this new era of college for all, their analysis refocuses our attention on higher education’s fundamental goals.”
— James Rosenbaum, Northwestern University

"A damning indictment of the American higher-education system."
— Chronicle of Higher Education

“It’s hard to think of a study in the last decade that has had a bigger impact on public discourse about higher education and the internal workings of colleges and universities alike than has Academically Adrift.”
— Doug Lederman

“The time, money, and effort that’s required to educate college students helps explain why the findings are so shocking in a new blockbuster book—Academically Adrift: Limited Learning on College Campuses—that argues that many students aren't learning anything.”

“For a short book, it takes a major step towards evidence-based assessment of student learning. . . . All university managers might like to read 40 pages of this book a week for the next five weeks and produce a 20-page report on ‘Countering Academic Drift: Developing Critical Thinking in the University.’”

“Whatever criticism this book provokes in the higher-education establishment, its value is enormous. The disconcerting findings of Arum and Roksa should resonate well beyond the academy.”

“Despite the book’s moderate proposals, some critics have painted this book as misguided punditry. Readers of Teacher-Scholar, however, would be remiss not to take this book seriously. Arum and Roska’s use and analysis of CLA data, although sometimes flawed, lift this book out of punditry and into serious scholarship. They show that almost half of college students do not improve on important skills that they should gain in their first years in college, and they convincingly connect this problem to the lack of academic rigor at many universities. Likewise, although their recommendations for more accountability are vague and incomplete, they raise an important question about whether we are entering a new era where the federal government or accrediting agencies will find new ways to hold universities accountable for learning outcomes. The future regulatory environment is uncertain and faculty members and administrators should take note of the growing critique of higher learning as well as these new conversations about accountability.”
— Matthew Johnson

“Before reading this book, I took it for granted that colleges were doing a very good job.”
— Bill Gates

“Seriously researched, rich in data, and sometimes adorned with dozens of tables that the uninitiated may find cryptic, works like…Academically Adrift (2011) by Richard Arum and Josipa Roksa focus on particular aspects of the system. They excavate a world of ugly facts and unsatisfactory practices that has the gritty look and feel of reality—a reality that has little to do with the glossy hype of world university ratings….In Academically Adrift, Arum and Roksa paint a chilling portrait of what the university curriculum has become.”—New York Review of Books
— Anthony Grafton

“Arum and Roska offer a startling look at the current state of learning in undergraduate circles…. Their work fundamentally challenges the goals of higher education, serving as a text that will make everyone start to think.”
— Tyler Billman, Southeastern Illinois College

Richard Arum is professor in the Department of Sociology with a joint appointment in the Steinhardt School of Education at New York University. He is also director of the Education Research Program of the Social Science Research Council and the author of Judging School Discipline: The Crisis of Moral Authority in American Schools. Josipa Roksa is assistant professor of sociology at the University of Virginia.